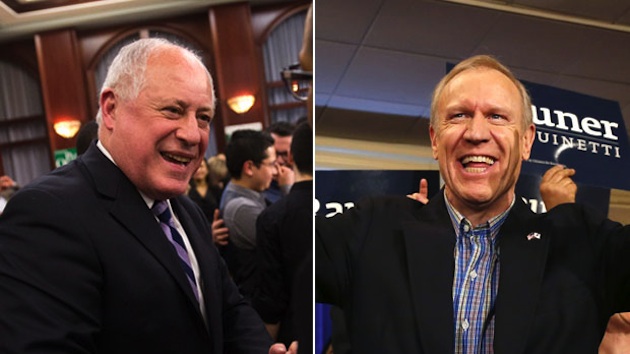 The Quinn camp immediately pushed back on the results of the poll.

“This is from the same pollster who was off by 15 points in the Illinois Republican primary,” Quinn campaign spokeswoman Izabela Miltko said. “We don’t put much stock in phony robo-polls conducted by supporters of the governor’s opponent. Legitimate polls have this race neck and neck.”

In a reliably Blue state, which consistently votes Democrat on both statewide and national levels, isn’t it likely that Rauner’s lead — if any — is overstated? Quinn’s own campaign and the Illinois Education Association had Quinn trailing Rauner by 1 and 4 points, respectively.

So, whose right? Let’s take a look at the PPD average of head-to-head polling conducted since the beginning of the cycle, and then see if the results hold up against scrutiny .

Obviously, Rauner enjoys a consistent lead in the polls, but polling this cycle has been abysmal, in general. Below is the Real Clear Politics average of polls from the 2010 gubernatorial contest in Illinois (PPD didn’t average the 2010 Illinois governor race). As we can see below, state Sen. Bill Brady, who took another stab in 2014 but was defeated by Rauner, held a decent lead over Quinn going in to Election Day.

Despite all the prognosticators forecasting the race for Brady, Quinn eked out a small 46.6 – 46.1 victory over Brady, even when now-Sen. Mark Kirk (R-IL) won President Obama’s old seat. So, it’s easy to see why we are fairly cautious about polling and how it may unfairly influence our election projection model at PPD. That being said, we still rate this race “Leans Republican” and believe Rauner’s lead is real, albeit not nearly as large as WeAskAmerica suggested.

The reasons are simple yet there are several, and many of which now present in 2014 were non-issues in 2010.

First, Rauner’s support is strong statewide and dominate downstate. Brady’s numbers were strong downstate but weak in the Chicago suburbs and within the city. Since 2006, no Republican candidate has won statewide in Illinois without taking at least 20 percent of the vote in the city.

Even though Quinn has spent a ton of money attempting to paint Rauner as an out-of-touch “billionaire” — a line of attack that mirrors the “vulture capitalist” narrative Democrats used on Mitt Romney and so many others —  voters in Illinois are actually evenly split over which candidate best understands their everyday concerns. The same was not true of Brady.

Though the headline numbers vary by survey, there is one damning dynamic that is currently posing a serious challenge for Gov. Quinn. Not only do voters say Rauner is a reformer, but also that Quinn is a failure, which brings me to the second factor. Quinn was badly tarnished by his failed $54.5 million Neighborhood Recovery Initiative, a corrupt anti-violence grant program that is now under federal investigation.

Quinn shut down the program after Auditor General William Holland said NRI grant funds were going to the politically connected and suspicious social-service groups with little-to-no oversight of how taxpayer money was being spent. But the damage has been done.

Third, and perhaps most important, there is a very real civil war going on among Democrats in the state of Illinois. In one corner, you have loyal, lock-stepping liberals who continue to support the teacher unions and their budget-busting pensions that are bankrupting the state for zero return. In the other corner, moderate Democrats are in full rebellion, recognizing the state is headed for a financial disaster unless there is a course correction.

“President Kennedy once said, ‘Sometimes party loyalty asks too much,’” Minow said. “I think this is one of those times. I’m a strong Democrat, but I’m taking a leave of absence from my party because Illinois is in desperate shape.”

Minow believes the state must change course with Rauner before it is too late, as pension-to-debt ratios threaten to overwhelm the state tied with Nevada for the country’s second highest unemployment rate in the country.

And he is not alone.

Last week, the Rauner camp announced the formation of Democrats and Independents for Rauner and launched their first Spanish language ad. It features a plethora of Democrats, ranging from environmental activists to a member serving on the Board of Directors for the Chicago Urban League, as well as several pastors from black and Hispanic churches in the inner city and across the state.

Reverend James Meeks, a long-time Democrat and head of Salem Baptist Church in Chicago, endorsed Rauner over Quinn in April, just one month after Minow.

“The Democratic party just assume always that 97 percent of the African-American vote will go to the Democratic party. If that assumption is true, they never have to work for our vote,” Reverend Meeks said. “Our schools are still broken and getting worse. We’re last in employment or business. Our neighborhoods are deplorable,” he added.

Rauner has already made a visit to the faithful at Salem Baptist and Reverend Meeks has been reaching out to other pastors about getting Rauner in front of more African-American congregations. Rev. Ruben Cruz, Pastor at First Spanish Christian Church of Chicago, also answered the phone when Rauner called. Featured in the ad, as well, Revs. Cruz and Meeks will be crucial to Rauner’s performance in the city, which again, needs to exceed 20 percent.

Though this race is likely to tighten, as of now, we believe Rauner has the votes to defeat incumbent Gov. Pat Quinn. Illinois has a long history of polling competitive races until disgruntled Democrats come home in the final stretch. However, we also believe that Rauner’s support among Democrats is significant, which will limit that effect this cycle to the detriment of Team Quinn.

“We still get the same promises from the Democratic party, but we don’t get any deliverable. I think it’s time we should look at another candidate,” Reverend Meeks bluntly illustrated.

The teacher unions failed to stop Rauner in the GOP primary, despite ad buys and cross-over efforts, when they pulled Republican ballots and voted en masse for Kirk Dillard. According to PPD’s 2014 Governor Map Predictions model, which relies upon a comprehensive rating system dealing in probabilities, they have slightly less than a 44 percent chance of not repeating their past failure.