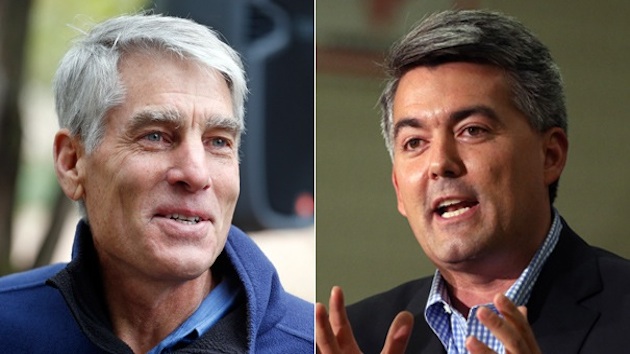 Republican Rep. Cory Gardner is steadily increasing his chances of defeating vulnerable incumbent Sen. Mark Udall in the closely watched Colorado Senate race. Gardner is now a 61 percent favorite in the race, up from the 56 percent advantage he enjoyed when PPD last evaluated the contest.

The race remains Leans Republican, but the increase in probability reflects a clear solidifying of Gardner’s advantage. For 7 of the past 7 days, the race has incrementally moved in Gardner’s direction.

Let’s take a look at the commentary, analysis, polling, state data and, of course, you can always get an idea of the overall political landscape by checking out the 2014 Senate Map tab on the end.

A new CNN/Opinion Research Poll confirmed what we have been observing in PPD’s tracking of undecided voters, which is that Sen. Udall is getting destroyed in the suburbs and demolished in the rural areas. His lead in urban Colorado is simply not enough to overcome his shortfalls elsewhere and, in fact, is far less than previously successful Democratic candidates.

Further, as we’ve hammered the entire cycle, most notably here and here, Udall’s vulnerability on approval and favorability always presented an opening for the GOP. That said, they needed a candidate who could exploit it and, we’ve long-held Gardner is that candidate. It’s just that now the data are converging on the fundamentals.

Udall is underwater on both his favorability rating — 45/51 percent — and his approval rating, which has fluctuated from the low 40s to the high 30s for months.

Gardner, on the other hand, is now viewed favorably by 50 percent of likely voters, with just 42 percent saying their opinion of him is unfavorable.

Before getting into the analysis, it is worth noting that the endorsement by the left-of-center Denver Post of Rep. Cory Gardner over Sen. Mark Udall was a disaster for the Democrats. We believe the Editorial Board captured the sentiment of the electorate in Colorado fairly well. They mirrored what we have been hearing from the group of undecideds tracked by PPD for the election projection model.

“Rather than run on his record, Udall’s campaign has devoted a shocking amount of energy and money trying to convince voters that Gardner seeks to outlaw birth control despite the congressman’s call for over-the-counter sales of contraceptives,” the Denver Post Editorial Board wrote. “Udall is trying to frighten voters rather than inspire them with a hopeful vision. His obnoxious one-issue campaign is an insult to those he seeks to convince.”

Colorado, along with Iowa, had been on PPD’s election projection radar months before any of the other prognosticator even began paying attention. The dynamic of this race has changed dramatically since the National Journal released a May article entitled, “Colorado’s Forgotten Senate Race.”

As we’ve previously explained, the entrance of Cory Gardner to the race was a game-changer, because he closed the ever-important talent gap, which sent this race into competitive territory when it significantly increased the Republican score on our candidate strength variable.

Just after Labor Day, Udall began bombarding Gardner with heavy advertising and the incumbent will likely retain a slight money advantage. Yet, despite having spent roughly $7,000,000 out of his $13,000,000 war chest by the beginning of August, mostly on attack ads aiming to define Gardner as extreme on social issues early, we have seen a fairly consistent lead for Gardner in the more-accurate likely voter polling samples. At the same time, Udall’s numbers have taken a turn for the worse while Gardner’s favorability ratings and levels of support have steadily increased.

If not for two reasons, in particular, Gardner’s chances of victory would be far higher than PPD’s model currently suggests.

First, polling in the Centennial State consistently underestimates Democratic support. Most notably, and most recently, we saw this in both 2010 and 2012. However, we do have some data to suggest the ground game gap is closing.

Meanwhile, Republicans have steadily increased the number of active voters and at a faster pace than Democrats. They have added 23,244 voters to their roles for a total of 949,029 active voters as of October 1, up from 925,785 in 2012.

Now, you may have noticed that Colorado Republicans outnumbered Democrats in 2012, yet Barack Obama still defeated Mitt Romney in the Centennial State 51.49 – 46.13 percent. That’s simply because the state of Colorado has a massive number of independent voters — 900,490 in 2012, and 1,032,290 as of October 1, to be exact — and they broke for Obama by a 54 – 45 percent margin even as independents nationwide went for Romney.

However, unfortunately for Sen. Udall, based on the polling data available, independent voters have completely abandoned him and are now breaking for the challenger.

For the first time, voters will have to mail in their ballots if they want to vote in the election, which we have always contended will work to the Democrats’ advantage. As far as we know, we are the only model that assumes a risk of voter fraud and, for reasons John Fund rattled off this week in National Review Online, the risk is extremely high. Several provisions in HB 1303 create an environment ripe for fraud and, considering Democrats rammed it through without any bipartisan support, we can only assume the variable must be weighed to favor Udall.

Nevertheless, it is difficult to see how Udall will close the gap with under 3 weeks left to do so. Out of an abundance of caution, we may just find that we overestimated the Democrats’ ground game. That may very well be the case. But it is very difficult to unseat an incumbent precisely because of their money advantage and built-in ground game, which the GOP has had to play catch up on for months. Fortunately for them, the electorate is likely to give their candidate enough wiggle room to account for their disadvantage in that area.

(Please note: Our model uses separately calculated averages from weighted polls based on PPD’s Pollster Scorecard. Above is the raw spread and the PPD weighted average.)[/tab]
[tab title=”State Data”]

Thom Tillis Turning It Around? Support For Kay Hagan Falling In Final Weeks