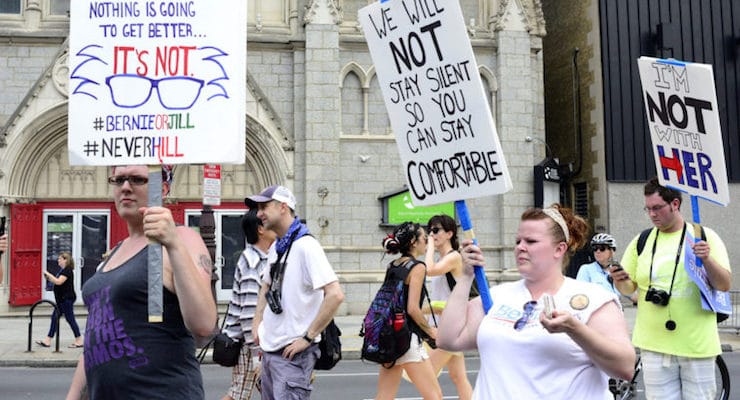 Supporters of Sen. Bernie Sanders protest against Hillary Clinton and the DNC outside the Democratic National Convention in Philadelphia. (Photo: Stephen Melkisethian/Flickr/Creative Commons)

The People’s Pundit Daily U.S. Presidential Election Daily Tracking Poll results show a small but clear movement to Green Party candidate Dr. Jill Stein post convention. The survey, which was used to make the PPD Election Projection Model the most accurate on the Internet in 2014, began tracking on July 3 and was first released for public consumption on Saturday.

We’re right, They’re wrong. Period. That was the case in 2014 and it’s the case now. Donald Trump still maintains a roughly 4-point lead over Hillary Clinton, though that’s down several points from his post convention bounce. Mrs. Clinton has enjoyed a small bounce after she accepted the nomination at the Democratic National Convention in Philadelphia.

However, there are a significant number of voters who supported Sen. Bernie Sanders during the Democratic primary who now say they will either vote for Dr. Stein, Mr. Trump, former New Mexico Gov. Gary Johnson or not at all–in that order.

Below is an interactive chart based on more than 400 responses conducted last night (7/30/2016) via our Internet panel and live interviews. It provides cross tab data to determine the presidential preference for primary voters based on the candidate they voted for in the primaries. While these results are particularly strong for Dr. Stein–there were also an unusually high number of 18 to 29 year-old samples–the total results include the 7-day rolling average, are weighted based on demographics from the U.S. Census Current Population Survey and show Mr. Trump ahead 46.8% to 42.2%.

The sub-sample shown in the chart paints pretty much the same picture as the overall result. The polling data indicate Mr. Trump did a better job winning over those Republicans who did not vote for him in the Republican presidential primary (88%), as well as maintain those who did (97.8%). Mrs. Clinton is maintaining 94.4% of Democratic voters who cast their primary ballot for her, but less than half (47.7%) of those who voted for Sen. Sanders say they are certain they will be on board.

Now to Dr. Stein’s bump. Again, we do not believe Mrs. Clinton will only end up with half of Sen. Sanders’ voters. Last night was an unusual response. But we are saying many, many voters are very, very angry.

Nearly 16% of Sanders supporters say they will vote for Mr. Trump, but more than a quarter are at least giving Dr. Stein a serious look. Sanders’ voters also have a largely favorable view of Dr. Stein (56%), compared to only 33% who say the same for Mrs. Clinton. Not surprisingly, these voters are markedly more likely to say they don’t believe the federal government acts in the interest of the people. Another 5.6% of her support comes from the small pool of voters who supported another candidate in the Democratic presidential primary.

Whether Dr. Stein can maintain that level of support is uncertain and worth debating as we collect and digest more polling data in the upcoming days and weeks. But what isn’t up for debate is the fact that a significant number of Sen. Sanders’ voters have extremely negative views of Mrs. Clinton and are not quite ready to just suck it up and move on.

Worth noting, we did not see this level of discontentment before the anti-secrecy group WikiLeaks released some 20,000 embarrassing emails that revealed the DNC was actively working against the socialist senator from Vermont to coronate Mrs. Clinton. Despite the fawning media coverage, Mrs. Clinton still has much work to do ahead of November. The good news for the former secretary of state and her supporters is that we anticipate the anger to subside, at least somewhat. When it does, it will no doubt become much closer, though Mr. Trump was trending higher even before the conventions.

Still, the numbers are readily available to carry her to victory in November, if she can bring everyone home.