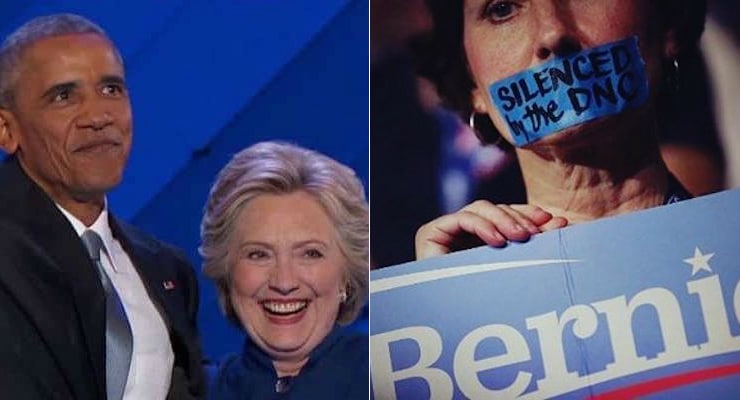 Democratic President Barack Obama and Hillary Clinton, left, and a supporter of Bernie Sanders, right, at the Democratic National Convention at the Wells Fargo Arena in Philadelphia. (Photos: AP)

“Polls show that Hillary Clinton, the official Democratic nominee, is an incredibly weak candidate in the general election,” the staffers wrote. “Even after spending $57 million in ads (vs. $4 million by Trump) she is trailing slightly, and Trump is actually leading in several important swing states. Frankly, Hillary Clinton does not have the credibility to take on the dangerous appeal of Donald Trump.”

The open letter comes only a few short days after Mrs. Clinton accepted the Democratic nomination for president. While her supporters were drowning out the remaining anti-Hillary delegates who didn’t have their credential revoked by the DNC with chants of “Hillary,” the first woman ever to secure a major party’s nomination for president still hasn’t won over a large wing of her party amid an embarrassing scandal that caused a political uproar ahead of the Democratic National Convention in Philadelphia.

Sen. Sanders was booed twice for mentioning the former secretary of state’s name at the convention and did his best to unify a fractured party, even passing out notes to his delegates asking them not to boo or stage a walk out. Mrs. Clinton even tried to thank Sen. Bernie Sanders and call for unity from his supporters.

“Bernie, your campaign inspired millions of Americans, particularly the young people who threw their hearts and souls into our primary. You’ve put economic and social justice issues front and center, where they belong,” she said. “And to all of your supporters here and around the country: I want you to know, I’ve heard you. Your cause is our cause.”

However, it was those very supporters who were mocked and criticized by top officials in emails leaked by the anti-secrecy group WikiLeaks. The roughly 20,000 emails revealed both anti-Sanders bias at the Democratic National Committee (DNC) and collusion between the DNC and so-called “mainstream” media new outlets, such as The Washington Post, Politico and even NBC News.

The scandalous leaks resulted in the ouster of DNC chair Debbie Wasserman Schultz, who was replaced by Donna Brazile, a longtime ally of the Clintons who served as interim chair when Tim Kaine (VP nominee) decided to run for the U.S. Senate in Virginia. However, in what many saw to be a tone deaf move for someone trying to reach out to Sanders’ voters, Mrs. Clinton hired Schultz to be her campaign’s 50-state chair.

“For a variety of reasons, many justified and some not, people don’t trust her. We are now faced with two of the most disliked presidential candidates in the history of the country,” the letter reads. “Unfortunately, too many people are disillusioned with politics and the lack of inspiring viable candidates will only hurt voter turnout. If there was ever an opportunity to break the corporate two party duopoly, this is it. So, we respectfully ask you to consider Jill Stein’s offer of a united Green Party ticket.”

The staffers aren’t the only former Sanders supporters turning to Dr. Stein in the wake of Mrs. Clinton’s nomination. According to the People’s Pundit Daily U.S. Presidential Election Daily Tracking Poll, a significant number of the Vermont socialist’s supporters say they will now back Dr. Stein in November. She has reached her highest level of support in the poll to date and Mr. Trump maintains a roughly 5 point lead.