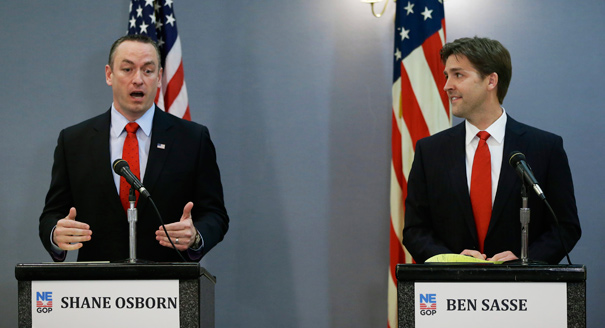 Armed with an anti-Establishment sentiment, groups like The Club For Growth, Senate Conservatives Fund, and FreedomWorks are mounting challenges to incumbent GOP Senators deemed insufficiently conservative. For the mainstream media and the Washington political class, they are dangerous and threatening to the Republican Party’s chances at taking the Senate.

Despite the anti-incumbent rhetoric, incumbents rarely lose elections. And memories of Todd Akin and Richard Mourdock — two very winnable Senate seats lost to careless if not stupid comments — still fester in the back of Republican primary voters’ minds. But the Nebraska Senate race is one race in which primary voters are in a position to choose whomever they want as their next senator.

Both leading Republican hopefuls Shane Osborn and Ben Sasse are odds-on favorites to win against their Democratic challenger in the Nebraska Senate race. On our 2014 Senate Map Predictions, the general election is rated “Safe Republican.” However, Sasse, 42, who has been the president of Midland University, a small Lutheran school in Fremont since Dec. of 2010, is backed by the aforementioned conservative groups. Recently, FreedomWorks revoked their endorsement of Shane Osborne, opting instead to back Sasse.

“Both Osborn and Sasse are great people, and this was not a decision taken lightly,” FreedomWorks president Matt Kibbe said in an email.

“The question at the heart of this decision is, who would caucus with the Freedom Caucus, and who would fall in line with the establishment? At this point, it is clear that Shane Osborn formed allegiances with Mitch McConnell and the K Street lobbying class.”

But, unlike many other races across the nation, Sasse runs stronger among both GOP primary voters and all voters in the state of Nebraska, according to a recent Rasmussen Reports poll. And although Senate Majority Leader Mitch McConnell may or may not personally favor Osborne, the NRSC — National Republican Senatorial Committee — will “plan to support the eventual nominee,” Bill Murphy from the NRSC wrote in an email.

“Our only role in the Nebraska Senate race is to be a resource for ALL of the candidates,” he said in an email to PPD.

Though the party fracture is often overblown, there are very real divisions in states such as Georgia, Louisiana, Alaska and North Carolina. But with the GOP’s chances of taking control of Senate gaining by the day, both the national political environment and the internal state dynamics are making it more and more possible for Republican primary voters to not have to settle on who they believe — or are told — is the most electable.

PPD still currently rates the GOP Nebraska Senate primary a “Toss-Up” — which you can review here — though the race is beginning to show signs of moving in Ben Sasse’s favor.