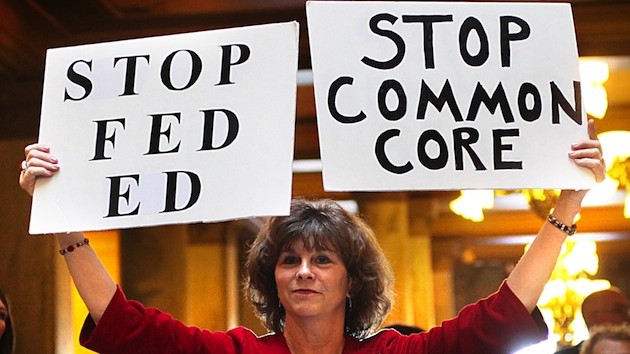 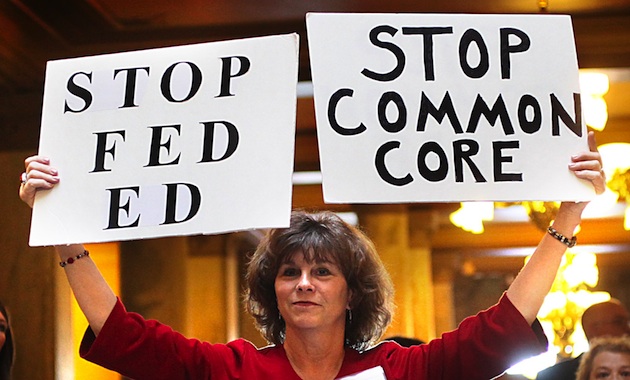 In this Jan. 16, 2013 file photo, concerned grandparent Sue Lile, of Carmel, Ind., shows her opposition to Common Core standards during a rally at the State House rotunda in Indianapolis. Some states are pushing back against the new set of uniform benchmarks for reading, writing and math that replace a hodgepodge of of goals that had varied wildly from state to state and are being widely implemented this school year in most states. (AP Photo/The Star, Frank Espich)

Gallup recently released a survey of public school parents that found a startling two-thirds of them have not even heard of the controversial Common Core standards. While the findings show American parents’ views toward the program tilt slightly positive — 35 percent say they have at least somewhat positive views to 28 percent who say at least somewhat negative — an even larger amount say they haven’t heard of it or don’t know enough to form an opinion.

Even worse still, among those who say they have heard at least a little about the Common Core standards, or in other words,”I don’t really know what it is but I guess I’ll give an answer to the pollster,” responses tilted positive by a 52 to 42 percent margin. There is one piece of data that stands out as an unequivocal sign the centralized federal program faces enormous challenges ahead, however.

Even though the vast majority of parents either know nothing or just a little about the criteria the federal government has mandated be taught to their children, among parents actually familiar with the standards, just 13 percent view them as very positive, while 19 percent view them very negative. So, who are these high information parents?

The answer is contrary to typical media narratives. Those who are most familiar with Common Core standards are Republican parents, 42 percent whom, view the program in a negative light. However, even among Democrats who are familiar with the standards, nearly a quarter (23 percent) say they view them negative.

Interestingly, whether or not parents are residing in one of the 44 states that have already begun to adopt Common Core criteria, has little to no impact. Sadly, as a testament to the severity of the problem of low-information American parents, even if public school parents are unfamiliar with the standards, they somehow still give relatively positive ratings to the key components of the law. Or, in other words, many American parents are simply unwilling to do their homework and are filling in the blank in their own parental tests.

“Parents in states that have already implemented Common Core are only slightly more familiar with it than those in other states, and their overall views toward the standards are about the same,” Gallup’s Mitchell Ogisi and Lydia Saad said.

There should be little wonder why or how our school systems and children consistently rank among the bottom worldwide.