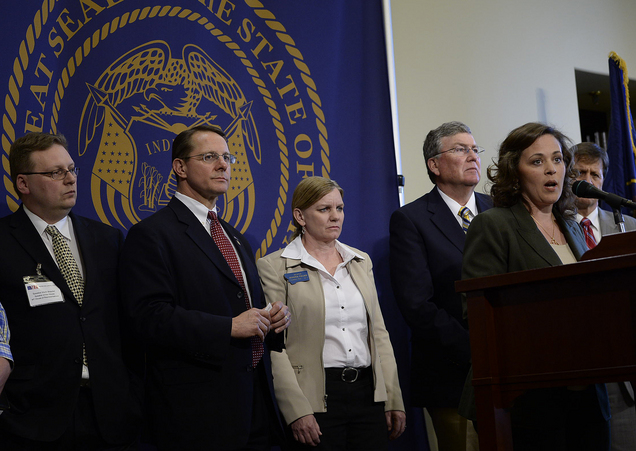 Over fifty state leaders from nine states gathered for the first time Friday to take a stand against a long-term federal land grab following the Nevada ranch standoff. The Salt Lake Tribune reported on the gathering, during which officials explored options to retake control of state resources — such as timber, oil and various minerals — which for all intensive purposes have been seized by the federal government for so-called “public” use.

Sen. Mike Lee (R-UT) attended the meeting and addressed the crowd during lunch, but it was Utah’s state officials who made the headlines.

“Utah has been way ahead on this,” said Montana state Sen. Jennifer Fielder. “We have to start managing these lands. It’s the right thing to do for our people, for our environment, for our economy and for our freedoms.”

Tensions between supporters of state’s rights and big, centralized government officials have been running high and came to a head when Nevada rancher Cliven Bundy took a stand against the Bureau of Land Management. Citing an endangered desert tortoise, the government sought to roundup and remove Bundy’s “trespass cattle” who were grazing on BLM managed land Bundy’s family settled on in the 19th century.

The BLM oversees more than 245 million acres of public lands nationwide, and roughly 48 million acres in the state of Nevada, including the Gold Butte and Lake Mead National Recreation Area Cliven Bundy is currently using to graze his “trespass cattle.”

“It’s time the states in the West come of age,” Idaho Speaker of the House Scott Bedke said. “We’re every bit as capable of managing the lands in our boundaries as the states east of Colorado.”

While many are citing the fact that the federal government controls roughly 85 percent of the land in Nevada, it is a little known how this came to be.

“The people inhabiting said territory do agree and declare, that they forever disclaim all right and title to the unappropriated public lands lying within said territory, and that the same shall be and remain at the sole and entire disposition of the United States,” the state Constitution says in the ordinance section. The giving up of public land was a direct result of the early Progressive Movement. Western progressive politicians wanting to increase seniority positions in order to secure federal funds supported the logrolling deal to pass the Sixteenth and Seventeenth Amendments.

Because the North and South were happy with their disproportional representation in the Senate, western progressives bribed them with the rights to state public lands. Companies based in the North and South, who were by majority connected to rent-pushing D.C. politicians, were allotted federal funding to manage or extract resources from the land, such as minerals, oil and timber (used for railroads).

And the cronyism continues today.

PeoplesPunditDaily.com was able to confirm Senate Majority Leader Harry Reid is, in fact, up to his knees in the Nevada land grab. Further, the restriction of land use has nothing to do with a desert tortoise, but rather contracted plans devised long-ago to develop solar farms on the land.

However, these state officials are saying it is time to put an end to centralized control and cronyism. They are arguing that it is time the federal fulfilled the agreement in the 1894 Enabling Act, which was written up when Utah prepared to become a state. But because progressives rose back to power after President Grover Cleveland, they had no intention to make good on those promises.