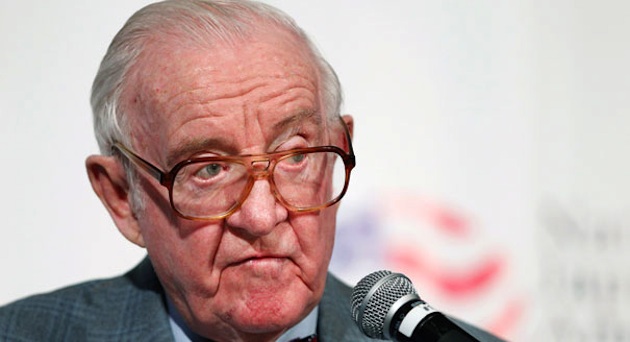 In his new book, “Six Amendments: How and Why We Should Change the Constitution,” retired Supreme Court Justice John Paul Stevens calls for restricting gun rights and free speech, as well as other changes to the Constitution he swore to defend.

The Supreme Court ruled in 1997 that states could not be forced to participate in a federal background check system. Justice Stevens dissented from the court’s 5-4 ruling in Printz v. United States, so he would like Congress to change federal gun laws to force them to. His justification isn’t exactly what you might expect from a legal scholar.

In an interview with The Associated Press, he said that after the Newtown shootings in December 2012, he decided we should do “whatever we could to prevent such a thing from happening again.” Knee-jerk reactions from politicians are to be expected, but the law is founded in logic, not feeling. While it was tragic that twenty first-graders and six educators were killed that day, all of the data suggest his proposal would do nothing to ensure another tragic event doesn’t take place.

A study commission by Eric Holder’s Justice Department found that the 1994 gun ban did nothing to stop gun violence.

“Attributing the decline in gun murders and shootings to the AW-LCM ban is problematic, however, considering the crimes with LCMs appear to have been steady or rising since the ban,” says Christopher Koper, whose report on gun violence was included in the Report to the National Institute of Justice.

“I’d think the chance of changing the Second Amendment is pretty remote,” Stevens said. “The purpose is to cause further reflection over a period of time because it seems to me with ample time and ample reflection, people in the United States would come to the same conclusion that people in other countries have.”

Except, even if other countries’ laws actually worked, which they do not, comparing a confederation of states like the United States with individual nation-states like England or France, is a textbook apples to oranges comparison. Further, what Stevens is essentially stating is that he and the leaders of other countries abroad are wiser than our own Founding Fathers.

It is a wild proposal considering recent events and reports. A recent report from a government watchdog group found an extraordinary amount of federal agencies arming up, particularly agencies that Americans would never consider to need a police force. And all of these events occurred amid the Nevada ranch standoff, which if nothing else demonstrated the willingness of the federal government to call up police power and use force.

He also proposed limiting free speech by limiting the total contributions individuals can make to candidates for Congress, president, political parties and political action committees. The 2010 ruling in Citizens United, which Stevens again disagreed with, leveled the playing field between individuals and labor unions.

“It’s about financing the election of representatives of other people,” Stevens said.”It’s about the influence of out-of-state voters on the election in your district. It sort of exposes a basic flaw in the recent cases.” Again, that’s exactly what labor unions had a monopoly on prior to the ruling, which was affirmed last month in McCutcheon v. FEC, albeit they and other pro-Democrat actors had backdoor methods for doing so.

John Paul Stevens was nominated to the Supreme Court in 1975 by Republican President Gerald Ford, the establishment candidate who nearly lost his own nomination to President Ronald Reagan. Ford lost reelection to Jimmy Carter. Nevertheless, there is little wonder the Supreme Court has seen its confidence ratings plummet.

Over Export-Import Bank, K Street And Wall Street Gang Up On Main Street