HomeNewsPoliticsRNC Chair On Presidential Debates: ‘Liberal Media Doesn’t Deserve To Be In The Driver Seat’

RNC Chair On Presidential Debates: ‘Liberal Media Doesn’t Deserve To Be In The Driver Seat’ 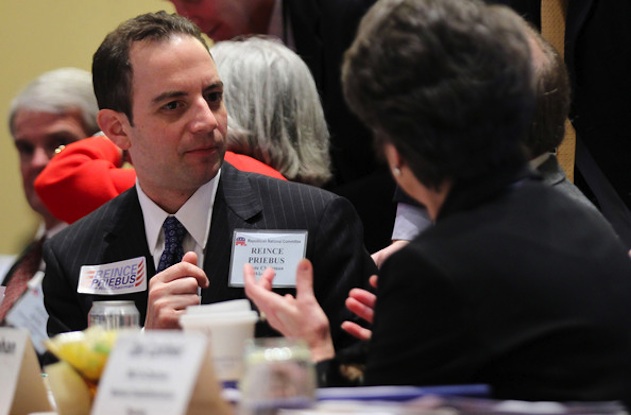 The Republican National Committee overwhelming voted Friday to limit presidential debates in the future, restricting the number of events that 2016 candidates can participate in. The vote was 152-to-7 in favor of granting the RNC sole discretion to decide which debates will be deemed “sanctioned debates.”

According to the language in the Republican National Committee rule, the decision will be made based upon the “timing, frequency and format, the media outlet and the best interests of the Republican Party.” If a future candidate decides to participate in a non-sanctioned debate, then they will not be eligible to participate in sanctioned debates, which will no doubt be much larger events.

“The liberal media doesn’t deserve to be in the driver’s seat,” RNC Chairman Reince Priebus told The New York Times.

The media bias during the 2012 president election, both in the general and the primary, was unprecedented. Candy Crowley, a CNN host and former moderator during the Town Hall-style presidential debate between Mitt Romney and President Obama, actually interjected in favor of the president on the question of whether the White House misled the American people on the Benghazi terrorist attack. Not only was the instance highly unprofessional and inappropriate, but we also know now that it was inaccurate. Crowley allowed her bias to creep into the moderation, which allowed Obama to creep out of the truth.

But that isn’t the only reason the RNC wanted to strengthen their grip on presidential debates. Establishment Republicans complained of Tea Party and conservative insurgents getting free press and a platform to drag out the primary, which left little time for Mitt Romney to rebut President Obama’s “Vampire Capitalist” narrative. By law, a primary candidate cannot respond to negative ads until he has sealed the general election nomination, which allowed Obama to attack Romney unfettered just as President George W. Bush had done to John Kerry in 2004.

“I think maybe the last time we had too many. And so I think some of the rule changes, as long as they’re toward things that will enhance the party as a whole, are not a bad idea.”

Huckabee Rips Hillary On Benghazi: 'She's Gonna Have Some Es-plain'in To Do'