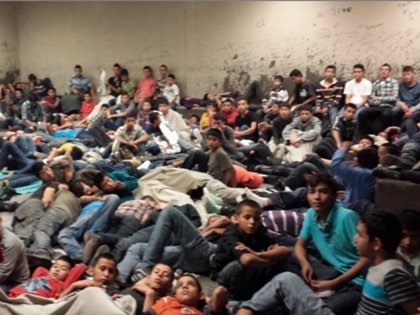 The refugee crisis on the southern border is evidently the classic government crisis and leviathan, and the National Association of Former Border Patrol Officers is calling it what it is.

Chairman Zack Taylor said “any elected member of the Executive or Legislative Branch of the U.S. Government that has not stood up and demanded that current Immigration Law be enforced vigorously since 1986 is fully and exclusively responsible for this latest invasion.”

“This is not a humanitarian crisis. It is a predictable, orchestrated and contrived assault on the compassionate side of Americans by her political leaders that knowingly puts minor Illegal Alien children at risk for purely political purposes.”

While many of these children have come with phone numbers of family members — both legal and illegal — in their pockets and waiting to be alerted by ICE of their arrival, many do not. America already cannot find homes for 400,000 native-born children who will now likely be forced to compete for families with these minors.

National Border Patrol Council Vice President Shawn Moran made an appearance on Fox News Channel’s “The Kelly File” to comment on the refugee crisis and respond to Taylor’s statement.

“This is a failure of policy. Right now we have an immigration system designed to fail and our agents the border patrol agents nationwide – they’re stuck in the middle,” Moran said. “They are doing the best they can with the resources they have. The border patrol is under siege in the Rio Grande Valley and yet, we have half our agents processing and we don’t know what is coming through.”

The U.S. government has kept this crisis a secret from the American people for over six months, and is now denying the media entry to the facilities and refugees. Moran confirmed reports that border patrol agents are no longer allowed to carry cell phones in the facilities, an effort to keep cell phone video footage from being leaked to the media.

“I’ve heard that and I’ve seen memos stating agents can’t have cell phones in the holding and detention facilities,” he said. “We think the American public needs to see what is out there.

When asked, the refugees are telling border patrol agents that local media and Catholic Church leaders told them that the U.S. government would give them a free pass if they came to the border. While illegal immigrants in the past ran from the U.S. Border Patrol, now, they are running into their arms. Guatemalan officials have confirmed to People’s Pundit Daily that they told the Obama administration six months ago that the influx was coming.

Officials also stated that we can expect at least 60,000 or so more refugees in the coming months.

“We can stop it by having some kind of consequence,” Moran added. “The word is out in Central America that this is your golden ticket to the United States — that immigration is not being enforced and the rule of law is not existing. We need to close the loophole or else it’s going to continue. You have to have consequences, or else it’s going to be exploited.”

The NAFBPO also said that even the corrupt cartels wouldn’t have organized or taken up this effort, an effort that was a direct result of the Obama administration’s refusal to adhere to the rule of law.

“Certainly, we are not gullible enough to believe that thousands of unaccompanied minor Central American children came to America without the encouragement, aid and assistance of the United States Government. Anyone that has taken two six to seven year old children to an amusement park can only imagine the problems associated with bringing thousands of unaccompanied children that age up through Mexico and into the United States. I doubt even the Cartels would undertake that chore at any price. No, it has to be heartless corrupt politicians and their minions lusting for more money and power,” the statement said.

“Will this heartless criminal exploitation of Central American infants and children finally awaken Americans to the ruse being foisted upon them by their government, the media and other interested parties, or has America lost her ability to stand up against the tyrants and do what is right rather than what is easy? Obviously, this administration thinks you are as corrupt as they are and will vote them back into office or these young children would not be streaming into America to tug at your hearts and empty your heads of reason.”

Taylor called on Americans to “to rise up and report in mass to the ballot box with fire in their hearts for the rule of law.”

Benghazi Suspect Arrested And En Route To US, Where He'll Face Prosecution