HomeNewsPoliticsBusloads Of Illegal Immigrants Turned Back By ‘America-First’ Protestors

Busloads Of Illegal Immigrants Turned Back By ‘America-First’ Protestors 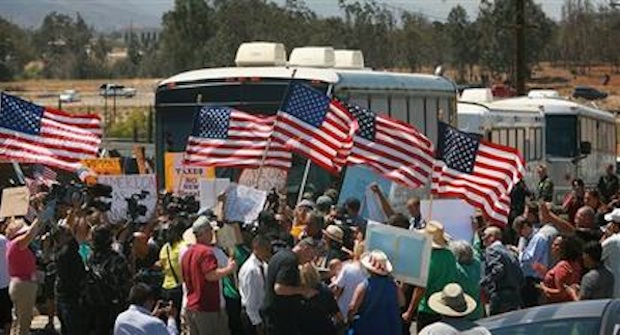 Busloads of illegal immigrants were turned back by flag-waving protestors in Murrieta, California, and rerouted to San Diego by Homeland Security. The protesters blocked the group from reaching a suburban processing center after Murrieta Mayor Alan Long organized residents to resist a plan to transfer the illegal immigrants from overcrowded facilities along the Texas-Mexico border to California.

Many protesters held U.S. flags, while others held signs reading “stop illegal immigration,” and “illegals out!”

“We can’t start taking care of others if we can’t take care of our own,” protester Nancy Greyson, 60, of Murrieta, told the Desert Sun newspaper. Others cited the VA scandal that resulted in the deaths of an untold number of veterans, as well as an enormous and unsustainable national debt, as reasons for opposing the manufactured influx of illegal immigration.

Although the liberal media and counter-protestors claim the assembled citizens are against little kids fleeing from violence in Central America, it was fear of disease, crime and destroying an already-strained government services apparatus that prompted Mayor Alan Long to organize the protestors.

Many find fault with President Obama’s unwillingness to enforce immigration law for the current crisis, and they aren’t limited only to Republicans, either. The National Association of Former Border Patrol Officers called the refugee crisis an “orchestrated and contrived assault” by a government with an agenda.

The Obama administration and the so-called mainstream media, which are pro-amnesty, are pushing a claim the illegal immigrants are escaping violence in Guatemala, Honduras and El Salvador. But this narrative stands in complete contrast to the accounts of those most closely involved.

“Claims these immigrants have a ‘credible fear’ of violence coming home are a flat-out lie,” another Border Patrol agent told Fox News. “The kids say they are here to see their mother, father or relative. The adults are working from a script. They all use the same words. When you dig deeper, they tell you the truth. They are here because a relative told them to come. They are here because they’ve been told they can stay. And it’s true. We are giving them a free pass. It is terribly frustrating for us who were hired to enforce the law.”

The government is also planning to fly the Central American illegal immigrants to various Texas cities and another undisclosed city in California, and it had already abandoned untold numbers in states such as Arizona before Gov. Jan Brewer sent a scathing letter to President Obama. Brewer urged Obama to stop abandoning illegal immigrants — many of which women and unaccompanied children — in Phoenix and other American cities with insufficient money, food or water.

“I remind you that the daytime temperatures in Arizona during this time of year are regularly more than 100 degrees,” she wrote. “Consequently, this federal operation seems to place expediency over basic humanitarian concerns.”

“This unwarranted operation is another disturbing example of a deliberate failure to enforce border security policies and repair a broken immigration system,” she added.

Meanwhile, minority leader Nancy Pelosi (D-CA) said last Saturday that the refugee crisis resulting from mass illegal immigrants crossing from Mexico into the U.S. is an “opportunity” rather than a “crisis.” However, it is evident that the people of Murrieta disagree, as do the American people as a whole.

A recent Gallup poll affirmed that most Americans aren’t exactly keen on the idea of legal immigration during times that have undoubtedly been economically challenging for millions of Americans, let alone the idea of accepting waves of illegal immigrants.

“In fact, more Americans think immigration should be decreased than increased, and by a nearly two-to-one margin, 41 percent vs. 22 percent,” said Lydia Saad of Gallup.

Further, 52 percent of Americans said in a recent Rasmussen poll the U.S. is not strict enough on illegal immigrants and companies who hire them, while a small 14 percent minority disagree.

The situation, both sides agree, is likely to get worse, particularly as the president gears up to once again act without Congress to ease punishment for illegal immigration.