Newly discovered Lois Lerner emails released by the House Ways and Means Committee show just how much contempt the former IRS official had for conservatives, who she refers to as “crazies” and “assholes.”

Following what appears to be an effort to monitor or eavesdrop on conservative talk radio hosts and their callers, Lerner mocks conservatives for being concerned about the direction of the country, a concern right-track wrong-track polling suggests is shared by an overwhelming majority of Americans. 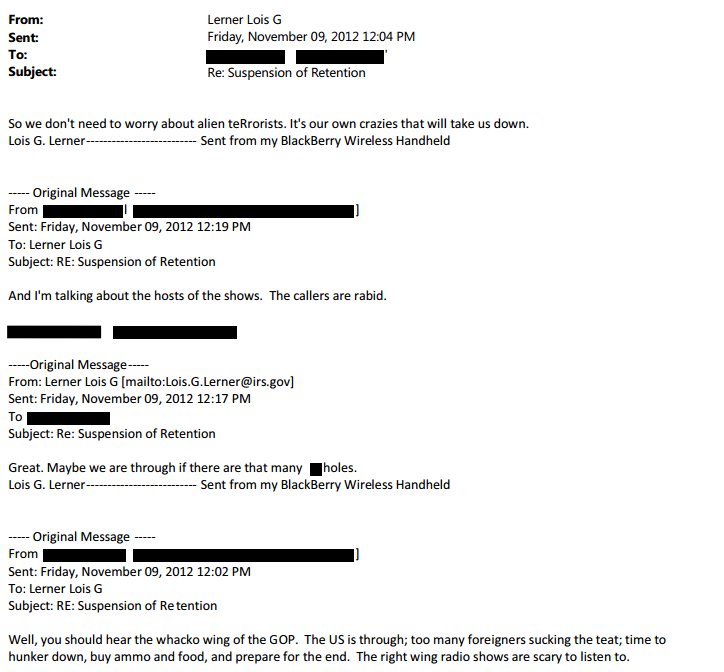 Lerner emails released by the House Ways and Means Committee.

“Today, I write with supplementary evidence in support of the Committee’s referral relating to Ms. Lerner’s willful targeting of conservatives and mishandling of taxpayer information,” Camp wrote.

“This new evidence clearly demonstrates why Ms. Lerner not only targeted conservatives, but denied such groups their rights to due process and eqaul protection under the law,” Camp adds.

The Republican-controlled House of Representatives voted to hold Lerner in contempt back in May, and further referred her activity to the Justice Department, who just recently agreed to open another investigation following new damning Lerner emails showing inappropriate and illegal targeting practices.

A recent poll conducted jointly by Democratic pollster Anderson Robbins Research and Republican pollster Shaw & Company Research found the vast majority of the American people aren’t buying the government’s story about the lost IRS emails, as just 12 percent of voters believe the emails were destroyed accidentally. Now, 76 percent believe the emails missing from the account of Lois Lerner, the ex-IRS official at the center of the scandal over targeting of conservative groups, were deliberately destroyed.

Republicans said the previous investigation by the Justice Department was “compromised” when it was learned that the Obama administration outrageously appointed an Obama donor to head up the probe.

In a previous letter to Attorney General Eric Holder, Republican lawmakers said they learned that Barbara Kay Bosserman, the trial attorney appointed to investigate the IRS scandal, was a long-term donor of both the Democratic National Committee and President Obama, a revelation confirmed by the White House.

“While the Committee has not seen any evidence of a serious investigation by your Department, it is my sincere hope that in light of this new, strong evidence that you immediately begin aggressively investigating this matter or appoint a special counsel,” Camp wrote to Holder.

Holder and the Obama administration have resisted calls for a special counsel thus far, but Lerner’s illegal activity apparently extends beyond targeting citizens with whom she ideologically disagree with. Committee investigators also found that Lerner used her personal email for official IRS business, including confidential return information.

“A newly discovered email from February 22, 2012 shows an exchange between Ms. Lerner and an IRS IT professional regarding a ‘Virus on Home PC,'” the letter states. “In exchange, Ms. Lerner indicates that she kept work information on her home computer, some of which may have been lost.”

The chairman said this new development “further raises concerns that taxpayer information may have been leaked.”

Cruz: Message 'Should Be About Repealing Every Bloody Word of ObamaCare'