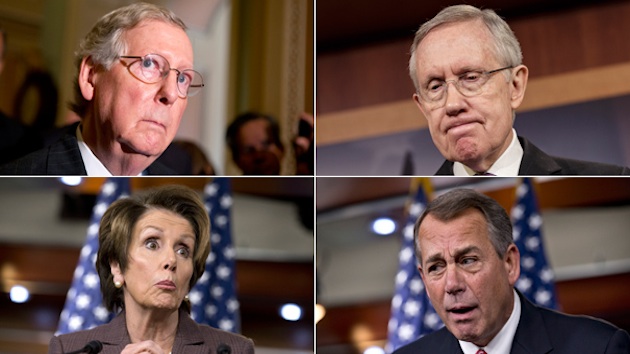 The Senate on Thursday approved a $1 trillion government-funding bill also approves Obama’s plan to train and arm the so-called “moderate” Free Syrian Army and other non vetted, outnumbered rebel groups. But the controversial, supposedly urgent bill was was packed with unrelated junk that members from both sides of the aisle oppose.

Lawmakers voted 78-22 in favor of the bill, with 9 Democrats and 12 Republicans voting “no,” along with one independent. The House approved adding the Syria provision to the stopgap bill Wednesday in a 273-156 vote, with more than 80 Democrats breaking with the president to reject his request.

The “no” votes in the Senate bill included several senators from both parties who are widely seen as prospective presidential candidates, including Sen. Ted Cruz (R-TX), Rand Paul (R-KY) and Elizabeth Warren (D-MA).

The legislation, which has now been approved by both chambers of Congress, now heads to the White House for Obama’s signature.

While the stopgap bill will prevent a government shutdown on October 1, blowing D.C. Democrats’ plans to force Republicans into self-implosion before Election Day. However, the vote is already being marked by the controversial funding that allows Obama to start a new training program for Syrian rebels in Saudi Arabia, a grievance long-understood as the reason Osama bin Laden started al-Qaeda in the first place.

It is ironic that the same liberals who claim drone strikes and the “occupation” of Iraq creates more terrorists now voted in favor of a plan Sunni muslims will view as a desecration of their holy land — and a true U.S. occupation. While legitimate anti-war liberals and some conservatives opposed that request, most opposing Democrats in Congress voted no out of fear of electoral blowback, rather than principle.

Still, there is legitimate bipartisan skepticism coming from lawmakers over arming rebels due to the fact that it will no doubt be difficult, if not impossible, for the Obama administration to ensure the weapons do not end up in the hands of terrorists.

“I have seen no evidence that the Syrian rebels we plan to train and arm will remain committed to American goals or interests,” Sen. Joe Manchin (D-WV) said. “Further, the opposition fighters that we will train care more about overthrowing Assad than they do about defeating ISIS. Assad is evil, but he is not a threat to America.”

Meanwhile, the bill also renews the charter of the Export-Import Bank, which money borrows taxpayer money from the U.S. Treasury to supposedly help finance purchases of U.S. exports. However, even though the argument to keep the Ex-Im Bank in existence is filled with rhetoric focusing on U.S. jobs, in practice the money disproportionately benefits K Street and Wall Street, rather than Main Street.

“The Export-Import Bank is fundamentally a subsidy for American exporters,” former Fed Chair Alan Greenspan said this week. “But the other question you have to ask is, ‘Does international competition and global economic activity do better if no country subsidizes its exports?’ My answer is yes.”

The movement to allow the charter of the Ex-Im Bank to expire was well on its way to victory until it received blowback from increasingly-big business friendly Democrats, such as New York Senator Chuck Schumer, who were able to exploit divisions over Ex-Im within the Republican Party. The conservative, economically populist wing of the party sought to hold the crony Chamber of Commerce wing accountable for their past promises, including a promise made by House Majority Leader Kevin McCarthy, himself.

In a letter sent to House Majority Leader Kevin McCarthy (R-CA) on the Ex-Im Bank today, the Club For Growth and Heritage Action For America reminded the House leader of his prior statements to Chris Wallace back in June of this year.

“We were greatly encouraged by your comments on Fox News Sunday on June 22nd, in which you stated that the Export-Import Bank is ‘something government does not have to be involved in. The private sector can do it,’” the letter stated. “You also quite explicitly answered ‘yes’ to the question of whether or not you would allow the charter for the bank to expire.”

“So, straightforward question, you can say it right here. You would allow the Ex-Im bank to expire in September?” Wallace pressed McCarthy in a follow-up question. “Yes, because it’s something that the private sector can be able to do,” McCarthy responded.

Nothing like a war to provide politicians with political cover for breaking promises, a good old-fashion “crisis and leviathan” at its best.

“Foreign competition’s response is never considered,” Greenspan said when asked to comment on the topic. “In politics, it’s the short term that regrettably sets policy, and that is what accounts for an overwhelming backing of the Export-Import Bank.”

Subsequently, the recently passed legislation also included $88 million to combat the Ebola outbreak in West Africa, a mission President Obama inexplicably dedicated more U.S. ground forces to achieve than he has in Iraq and Syria.

They're Already Here: The Many Faces Of Homegrown Terrorism

Report: Fed Probe, Witch Hunt Into 'BridgeGate' Turns Up Nothing On Christie