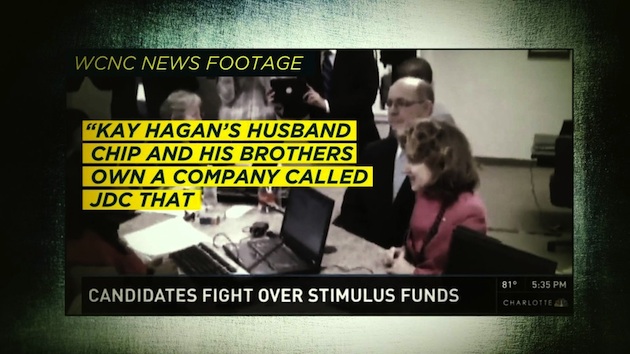 Republican Thom Tillis is looking to take capitalize of his late momentum with a new ad that underscores how Sen. Kay Hagan (D-NC) funneled stimulus money to herself and her family.

“Days after Kay Hagan took office, she pushed Obama’s stimulus bill,” the narrator says in the beginning of the 30-second ad “Tucked Away.”

“This bill will help this country move forward,” Hagan says in a clip from 2009.

“It didn’t, but it did help Kay Hagan move forward — personally,” the narrator says before a clip from a local reporter explains how Hagan supported the stimulus bill, which appropriated money that ended up in the Hagan family bank account.

“Kay Hagan’s husband Chip and his brother own a company called JDC that got a $390,000 grant in stimulus funding,” the reporter says in the ad.

“Grants, tucked away in Obama’s stimulus, paid the Hagans,” the ad says. “She’s 96 percent for Obama, 100 percent for herself.”

Hagan had managed to hold on to a very small, tenuous polling advantage for most of the month of September and early October, thanks in large part to a money advantage and massive ad buy that damaged Tillis’ image. However, her numbers have once again tumbled, with just 35 percent of North Carolina voters approving of her job as senator in PPD’s latest tracking. Now, her Republican challenger has pulled ahead slightly this week as previously undecided voters who were leaning toward Hagan are now giving him another look.

Tillis will get a little help in mainstreaming this potentially damning narrative.

The Freedom Partners Action Fund, a pro-Tillis group supported by the billionaire philanthropist Koch brothers, doubled-down on the line attack in their latest ad “Family Business.”

“Kay Hagan claimed Obama’s failed $800 billion stimulus would help North Carolina, but now we know it was Kay Hagan’s family who profited,” a female narrator says. “The Hagans’ business got nearly $400,000 of stimulus cash – our tax dollars! And what did the company do? It funneled the money to another company owned by the Hagan’s to do the work.”

As potent as the line of attack may be, Hagan’s success has come from running as a moderate. President Obama lost to Mitt Romney in North Carolina and is even more unpopular than he was in 2012. The president remains the biggest drag on the Democratic incumbent. Crossroads GPS, the nonprofit arm of the Crossroads groups, also launched two fresh ads in the state Friday, but they aim to link Hagan with President Barack Obama.

“When North Carolina needed Kay Hagan to stand up to Barack Obama’s bad policies Kay Hagan stood with Obama,” the narrator says. “When we needed Hagan to stop ObamaCare Hagan voted with Obama.”

The ad depicts a group of four voters changing faces by rotating between holding up a placard of Sen. Hagan in front of their face with another placard of President Obama. The goal is less than colorful, but it is a clear and effective strategy — tie Hagan to Obama.

Hagan’s campaign disputed the truthfulness in the ads, but a review of stimulus grants clearly shows the Hagan family business did, in fact, receive a grant from a bill that she voted for when North Carolinians were widely opposed to her doing so. Further, this isn’t the first instance of Hagan using her vote to support bills that benefit those around her.

During the fight over the Export-Import Bank, PPD revealed that Hagan helped to funnel money from the Ex-Im Bank in 2013 to supporter and small business owner, Jenny Fulton, of Miss Jenny’s Pickles.

While Hagan stated in a press release in March 2014 that the original justification for funding the company was so Ms. Fulton could “start shipping [her] product label to countries overseas,” the timeline just doesn’t add up.

When introducing Vice President Joe Biden at the Bank’s annual conference, Fulton admitted her company had already been exporting pickles for over two years to countries abroad, including China and the United Kingdom. She went on to say her company was on pace to do $1,000,000 in gross sales by the end of 2013.

So, why exactly did she need taxpayer money from the Export-Import Bank?

As it turns out, Sen. Hagan previously met Ms. Fulton at an event she hosted, which was a campaign/fundraiser event disguised as a small business exporter forum.

Meanwhile, Hagan retained her fundraising edge over Republican Thom Tillis in the final stretch of the campaign, but the National Republican Senatorial Committee reserved more than $6 million in additional airtime last week. The Republican candidate will have the money to close the deal, to be sure, but voters tell us in PPD’s tracking that they have largely tuned out advertising at this stage.

At this point, news headlines on the economy, ISIS, Ebola, and immigration are voters’ top concerns.

Joe Biden's Son Booted From Navy For Cocaine Use