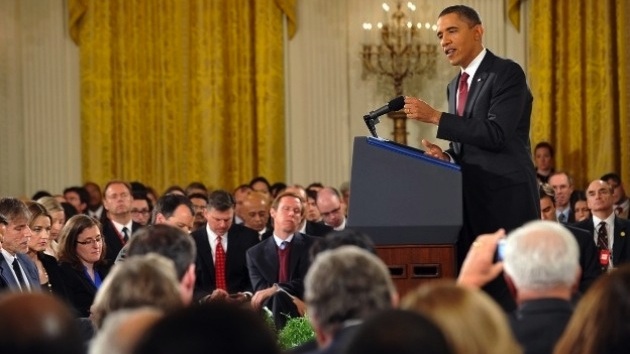 Speaking at a press conference just hours after Democrats suffered historical losses in the midterm elections, President Obama faced harsh questioning from reporters. While Obama did his best to come across as responsive to the voters’ message, the media were insistent on bring him back to the reality over the rhetoric, highlighting the president’s plans to take wildly unpopular executive actions before the GOP majority is sworn in.

Major Garrett, the Chief White House correspondent for CBS News, took the president to task over his expected plans to legalize millions of illegal immigrants before the GOP-controlled Senate can pass comprehensive immigration reform, which will have an emphasis on border security.

“Let me go back to immigration. Moments before you walked out here, sir, Mitch McConnell said — and, I quote — that if you, in fact, use your executive authority to legalize a certain number of millions of undocumented workers, it would poison the well — direct quote — and, ‘it would be like waving a red flag in front of a bull.'” Garrett said. “Do you not believe that is the considered opinion of the new Republican majority in the House and Senate and do you also not believe what they have said in the aftermath of last night’s results the verdict rendered by voters should stop you or prevent you from taking this action because it was a subtext in many of the campaigns?”

The roughly 73-minute press conference was filled with painful answers one-after-another, and an equal number of dodges and side-steps by the president. He repeated the same non-answer until Garrett’s interruption annoyed the president to the point of an audible groan, cutting off Garrett with a combative response.

The answer raised eyebrows in the room, and the press murmured to each other and themselves as the president ended with what seemed to be an attempt at a joke.

But it wasn’t delivered with a humorous attempt, but rather an irritation that comes inevitably is felt by a president who has been relatively coddled by the White House press corps and mainstream media outlets, even as he suffers two historic midterm defeats.

“It’s almost like you are doubling down on the same policies and approach you’ve had for the last six years,” said Fox News correspondent Ed Henry. “So, my question is, why would you not pull a page from the Clinton handbook and make a much more dramatic shift in course for these last two years?”

President Obama seemed less interested in answering any reporters’ questions or conceding the results of the race were, in fact, a referendum on his policies, as the consensus clearly holds. Obama simply acknowledged, “Republicans had a good night.”

As Garrett alludes, shortly before Obama spoke the soon-to-be new Majority Leader Mitch McConnell held his own press conference to tell reporters that the Senate is going to get back to work. Under the control of Democrat Majority Leader Harry Reid, the Senate — “the most deliberative body in the world” — was in a perpetual state of paralysis.

“The Senate in the last few years basically doesn’t do anything,” McConnell said. “The first thing I need to do is get the Senate back to normal.”

But Obama is pressing ahead with controversial and unconstitutional executive action on immigration. Despite being wildly unpopular, newly uncovered government print orders show the administration was requesting vendors supply upwards of 34 million blank work permits and green cards. The White House delayed executive action on amnesty in the hope they could fool the voters and save Senate Democrats. Now, however, the president is still moving forward.

“Before the end of the year, we’re going to take whatever lawful actions that I can take” to grant amnesty to an unknown number of illegals, Obama said.

Meanwhile, McConnell did extend several olive branches to the president in his press conference, and said he hoped the president wouldn’t take action with the consent of Congress in order to avoid “poising the well.”

“The American people have spoken. They’ve given us divided government. The question for both the president and for both the speaker and myself and our members is, what are you going to do with it?” McConnell said. “And I’ve already said I want to first look for areas that we can agree on and their probably are some. And that’s what we’re going to be talking about in the next few weeks.”