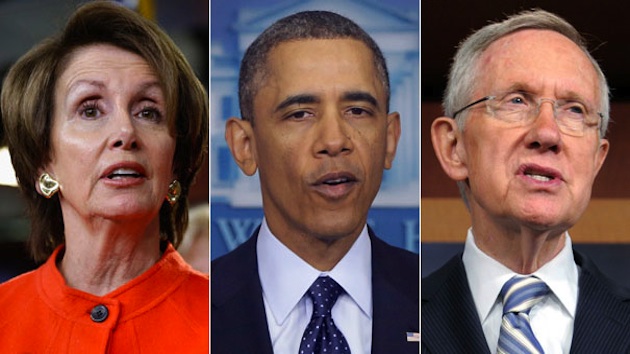 Leading congressional Democrats have been trying to cope with their historic loss to Republicans in last week’s midterms, and have apparently come to a consensus — it’s Obama’s fault. A series of blistering attacks on the president have dominated the headlines and, despite the attempts to downplay the attacks, they are growing in number and prominence.

“I do think that a bit of the hyperbole over the president is overplayed,” DSCC director Guy Cecil said at a Playbook lunch after the election. “He’s done everything we’ve asked.”

But that’s just not how the Reid camp sees it, at all.

Immediately after it became clear that a Republican wave was in the making, David Krone, Senate Majority Leader Harry Reid’s (D-NV) chief of staff, put operation “Blame Obama” in place.

Krone told the The Washington Post that Reid and other Senate leaders begged President Obama at a March 4 meeting to transfer millions in party funds and help raise money for Reid’s outside group, Senate Majority PAC. “We were never going to get on the same page,” Krone told The Post. “We were beating our heads against the wall.”

The whole elex in one kicker quote: "It’s all about Obama,” LaCivita told them. “That’s the way we win.” http://t.co/jsTZtGGajx

Jentleson even went so far as to repeatedly retweet the story via his followers:

According to a Democratic operative, the rapid-response story was “a way to protect Reid for the losses that we knew we were going to face.”

“The way it was done was to ensure that people knew Reid had no fault,” the statement given to The Hill read.

Meanwhile. speaking to members of her dwindling minority caucus in what was supposed to be a private call, Minority Leader Nancy Pelosi attempted to argue her case for why they should keep her in her leadership role. The answer was two-fold, and crystal clear — she can still raise money, and it was all Obama’s fault.

Even as Pelosi officially launched her bid to retain her position, a demoralized caucus is stirring with ideas of new leadership, though she is still favored to hold her position.

“My sense is that there is a growing appetite within the caucus for change,” a Democratic strategist said. “At what point do we say, ‘OK, we’ve exhausted this approach to leadership,’ or, ‘This current leadership has taken us about as far as we can go, we need some new ideas and fresh voices?’ ”

While many members were quietly listening to Pelosi’s pitch, which also included a vague proposal to “find new voters” in the next election, some spoke bluntly of the president’s role in their defeat. Rep. Jerrold Nadler (D-NY) said the party had messaging issues, but that President Obama should shoulder some blame.

“The whole zeitgeist for years has been the president, who has the bully pulpit, refusing to attack the Republicans, refusing to differentiate, refusing to defend his own policies,” Nadler said, according to one readout of the call published by Roll Call.

Rosa DeLauro (D-CT), a top Pelosi lieutenant and Co-Chairwoman of Democratic Steering and Policy, offered the view that Obama was central to their historic defeat, as Democrats now have their lowest number of members in nearly a century.

”This election again, in my view, was focused around President Obama. And it was not decided on a House of Representatives strategy. We had base voters who were disappointed in the President and who did not come out.”

However, Democrats’ excuses, which included repeatedly citing low-turnout and fundraising prowess, are largely without merit. Save for the Senate contest in Virginia, which has yet to be called, midterm turnout was up from 2010 across the board in states with competitive Senate and gubernatorial contests.

PPD’s post election research found the 2014 midterm electorate largely mirrors the electorate that tossed out Republican majorities in 2006, and is over 80 percent of the turnout seen in the electorate in 2012. In Colorado, now Sen.-elect Cory Gardner defeated Democratic Sen. Mark Udall by flipping the independent voter-rich Colorado Springs and Denver suburbs back to Republicans. The same group of voters that favored President Obama over Mitt Romney by 5 points backed Gardner by double-digits. Gardner also won at least 40 percent of the Hispanic vote.

In Georgia, home to a race every model except for PPD predicted would go to a runoff, it turned out to not even be close. Sen.-elect David Perdue, as well as incumbent Republican Gov. Nathan Deal, outperformed among black voters, who represented roughly 30 percent of the electorate, despite the Democratic campaign handing out flyers threatening another shooting of a black teenager if Perdue were to defeat Michelle Nunn.

Democratic claims of a shortage of money due to Obama’s shortfalls and other factors, are equally bogus.

Harry Reid’s Senate Majority PAC, a group supporting Senate Democrats, put out more than 40,000 Senate-focused television ads this election cycle, which was far more than any other outside spending group. The contribution by the PAC to the Democrat money advantage this cycle is actually understated by that number because, for every 20 ads run this cycle, 1 was put out by Reid’s group.

Nearly two-thirds of the money raised by Reid’s PAC — $34 million— came from big contributors giving half a million dollars or more, according to research of the Center for Public Integrity.

Bush On ISIS: 'This Is Al Qaeda Plus'