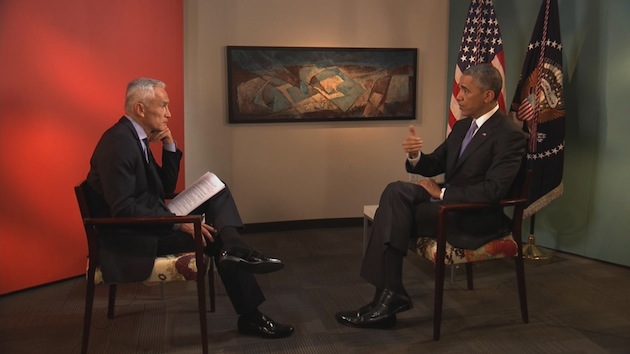 Univision’s Jorge Ramos pressed a filibustering President Obama over his flip-flops on immigration, and asked whether he’s concerned about being impeached. The president said he was not concerned about impeachment and that his recent executive order to grant what will result in amnesty for at least 5 million illegal immigrants was a “lawful” action.

“No, because what we’ve done is not only lawful, based on the evaluations of the Office of Legal Counsel,” Obama said. “But is of the same type of action that was taken by every Democratic and Republican president over the last 20, 30 years.”

However, on Wednesday, 7 more states joined the lawsuit against the unilateral order, bring the total number to 24. On at least 25 separate occasions, including several instances on Univision, President Obama admitted he did not have the power to defer deportation for anyone, even the so-called “Dreamers” and their families.

Meanwhile, recent polling shows Americans deeply disapprove of the president’s executive order, even if they agree with the outcome. Further, more than two-thirds — 68 percent of voters — are concerned Obama’s use of executive orders and unilateral actions may be “permanently altering” our country’s system of checks and balances, including 42 percent of Democrats, 72 percent of independents and 93 percent of Republicans.

In a Bloomberg poll conducted just prior to the FOX Poll, 56 percent of Americans disapprove of the order and just 39 percent approve.

JORGE RAMOS, FUSION: Republicans have filed a lawsuit against you trying to block your decision on immigration. Are you concerned about being impeached?

POTUS: No, because what we’ve done is not only lawful, based on the evaluations of the Office of Legal Counsel, but is of the same type of action that was taken by every Democratic and Republican president over the last 20, 30 years…

RAMOS: So it’s not that you changed your mind on this?

RAMOS: Or that you were convinced otherwise?

POTUS: — what was clear was that we could reprioritize how we deploy the limited resources we have to focus on the borders, to focus on criminals. We began that process as soon as I came into office. We amplified that approach through the DACA program that we instituted, and then we continued to see what else we could do. And Jay Johnson, I think, has done a terrific job in saying, here are our priorities. We’re not going to separate families. We’re going to focus on criminals. We’re going to focus on borders. We’re going to focus on new arrivals. Because one of the things that I think is important to understand is that although we are reprioritizing to make sure that we’re not in the business of separating families, we are still sending a message to people who have not yet come here, we’re going to be enforcing those immigration laws so that newcomers, people who just arrived, you are likely to be sent back. And we’re going to still be focused on making sure that, not just from Mexico but anywhere around the world, that we can actually enforce better the laws that we have. In the meantime, the people who have lived here, let’s make sure that they’re treated as the members of our community that they truly are.

RAMOS: But if you — as you were saying, you always had the legal authority to stop deportations, then why did you deport two million people?

POTUS: Jorge, we’re not going to —

RAMOS: For six years you did it.

RAMOS: You destroyed many families. They called you deporter-in-chief.

POTUS: You called me deporter-in-chief.

RAMOS: It was Janet Murguia from La Raza.

POTUS: Yeah, but let me say this, Jorge —

RAMOS: Well, you could have stopped deportations.

POTUS: That is not true. Listen, here’s the fact of the matter.

RAMOS: You could have stopped them.

POTUS: Jorge, here’s the fact of the matter. As President of the United States I’m always responsible for problems that aren’t solved right away. I regret millions of people who didn’t get health insurance before I passed health insurance and before I implemented it. I regret the fact that there are kids who should’ve been going to college during my presidency, but because we didn’t get to them fast enough, they gave up on college. The question is, are we doing the right thing, and have we consistently tried to move this country in a better direction. And those, like you sometimes, Jorge, who suggests that there are simple quick answers to these problems.