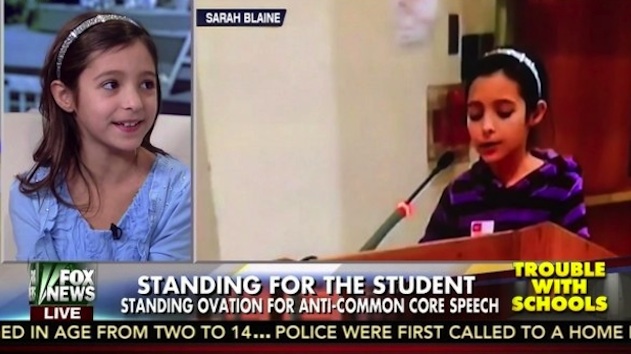 Elizabeth Blaine, a 10-year-old student from New Jersey, received a standing ovation for speaking out against Common Core at a meeting for the Board of Education. Elizabeth appeared on Fox and Friends on Monday to discuss the reasons she chose to speak out against the national Common Core standards, stating she was “honored” every one gave her such “respect” and a positive response.

According to a recent PPD report, Common Core is losing both the public opinion and policy wars, as more and more teachers, public school parents and, perhaps most important the children, all are increasing their support for repeal.

“It would seem that the more parents learn about Common Core, the less they like it,” said PPD’s senior political analyst Richard D. Baris, who conducted the prior report. “Opponents of Common Core have long alleged that they were up to the challenge of defeating a federal government takeover of education. They come from all ranks of the education system and all political parties.”

Although 46 states initially signed on to all or part of Common Core in return for stimulus money, which critics say amounted to a federal bribe, states such as Indiana, Oklahoma and South Carolina have repealed it. Now, various other states, including Tennessee, Missouri, North Carolina, and Louisiana are headed down the same road, while Alaska, Nebraska, Texas and Virginia never signed on in the first place.

“Their movement [opponents] has always had the advantage of Americans’ deep cynicism toward federal involvement in education,” Baris added. “For now, at least, opponents of Common Core are enjoying the momentum in both the policy and public opinion wars.”