HomeNewsPoliticsRep. Grimm Pleads Guilty To Tax Evasion, But Will Not Resign 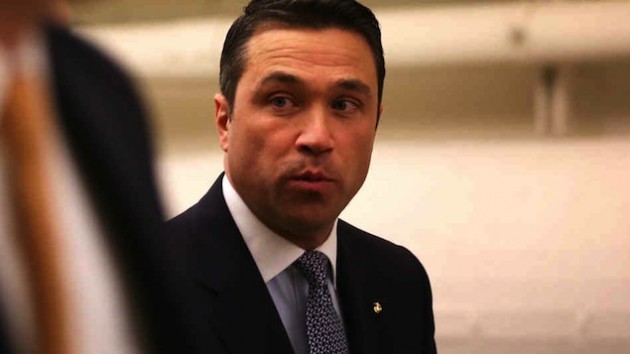 New York Republican Rep. Michael Grimm pleaded guilty on Tuesday to a federal tax evasion charge just weeks after cruised to re-election, but refuses to resign. Grimm, the Staten Island and Brooklyn-area representative, will be sentenced on the one count of tax evasion on June 8, and could face up to three years in federal prison.

He told reporters as he left the courthouse that he’s sorry for the mistakes he made as a small business owner. However, he stressed that all this happened before he entered Congress, and when asked if he would resign, said he’d serve as long as he is able.

In fact, even before he formally entered the plea, Democrats were calling on him to resign.

“Now that the election is over, Congressman Grimm is finally admitting the truth to his constituents,” House Democratic Leader Nancy Pelosi said. “Clearly, Speaker Boehner must insist that Congressman Grimm resign immediately.”

“We won’t have any announcements until the speaker discusses the matter with Mr. Grimm,” said Speaker John Boehner’s spokesman, Michael Steel.

A senior GOP aide also said Pelosi has “zero credibility” on the issue after standing behind other Democrats accused of wrongdoing.

Grimm was arrested in April, and the indictment against Grimm alleged the tax fraud began in 2007 after he retired from the FBI and began investing in a Manhattan eatery called Healthalicious. It alleged he was underreporting more than $1 million in wages and receipts to evade payroll, income and sales taxes, in part by paying immigrant workers, some of them in the country illegally, in cash.

In court on Tuesday, Grimm acknowledged that while operating the restaurant, “we underestimated gross receipts and used money to pay employees off the books. The tax returns were false.”

Judge Pamela Chin made no modification to his bail — he’s free on $400,000 bond — and Grimm was able to leave the courthouse.

Despite the investigation and bad press, Grimm handily defeated his Democratic opponent in the 2014 midterm elections by a whopping 13 points.

“Certainly, if I was not able to serve, then of course I would step aside and there would be a special election,” Grimm responded when asked whether he would resign if found guilty during an October debate.

However, outside the courthouse, Grimm was singing a different tune.

“As long as I’m able to serve, I’m going to serve,” Grimm said at his courthouse appearance.

The congressman was likely helped in the district when he made news in January telling a reporter he would “break you in half” and throw him off the Capitol balcony. The reporter had sandbagged him during an interview, asking about the charges and a federal investigation into campaign finance activity after claiming he would not beforehand.

The lawmaker was never charged with fundraising fraud. But a Texas woman romantically linked to him, Diana Durand, pleaded guilty in September to charges she lined up straw donors for his 2010 campaign.

Durand admitted she had asked “two friends” to make $12,000 contributions to Grimm and another politician and then secretly reimbursed them as a way to circumvent campaign contribution limits. She denied through her attorney that Grimm knew anything about it.

Debate: What Broke Trust Between Be Blasio, NYPD (Video)?