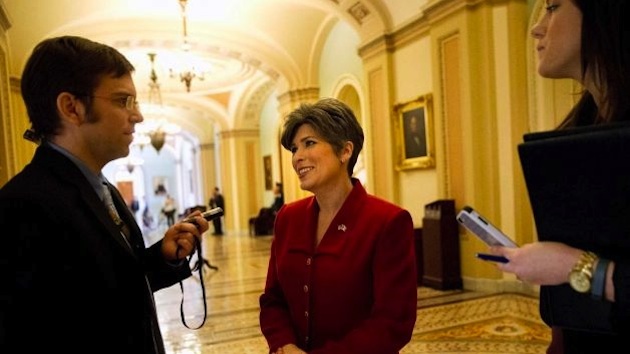 Sen Joni Ernst (R-Iowa), right, talks with a reporter on Capitol Hill in Washington, Tuesday, Jan. 6, 2015, before being sworn-in for the 114th Congress in Washington. (Jacquelyn Martin, AP / AP)

“Americans voted for change in the last election, and Joni understands that middle-class Americans want Congress to get back to work and that they want Washington to get refocused on their concerns, instead of those of the political class,” he said, adding that Ernst has a “unique” connection to everyday folks.

Ernst, a rising GOP star and first woman senator elected from Iowa and first female combat veteran to serve in the U.S. Senate, gained headlines and support for her ad “Squeal,” which equated castrating pigs with her ability to cut spending and “make them squeal” in Washington. She handily won the party nomination in a crowded field before defeated Democratic Rep. Bruce Braley is a race most pundits, except PPD, thought to be a Democratic-leaning contest.

Party members and leadership have praised Ernst for her military service, running stellar campaign, her political talent and energy.

House Speaker John Boehner, noted that Ernst “built a campaign by listening to the people of Iowa and focusing on their priorities, especially jobs and our still-struggling economy.” Plus, “she knows first-hand the sacrifices our men and women in uniform make to keep us all safe in a dangerous world.”

The choice to select Ernst is telling one. It indicates that the party is seeking to show the American people they are capable of governing responsibly, but also suggests party leadership is reaching out to their more conservative members. Ernst opposes amnesty and federal funding for abortion through ObamaCare, both issues conservatives feel they are being sold out on.

“[Ernst] built a campaign by listening to the people of Iowa and focusing on their priorities, especially jobs and our still-struggling economy,” House Speaker John Boehner said, adding “she knows first-hand the sacrifices our men and women in uniform make to keep us all safe in a dangerous world.”

Still, the choice to have a woman deliver the Republican response for the second year in a row may have been an easy one for the party heads to make, but it carries risk for Ernst, herself. A SOTU rebuttal can signal the beginning of a rising star’s career, but it also can stop it right in its tracks.

Last year, Rep. Cathy McMorris Rogers (R-WA), won high praise for her address. But Florida Sen. Marco Rubio saw a different reaction after he repeatedly reached for a bottle of water during his address. Louisiana Gov. Bobby Jindal was widely criticized for the delivery of his speech in 2009. Jindal, a bright politician and fast speaker, was clearly out of his comfort zone. What they decide to focus on sometimes gets overshadowed by delivery.

Still, Ernst adds a folksy Iowan, everyday American element that — if delivered effectively — would make a good start for the new Republican majority.

“Like so many of our colleagues, our folks back home sent us to Washington, D.C. with a clear mission, and that mission is to get to work,” Ernst said. “That mission is to craft and implement good policies and good solutions, which will enable us to get America on a better path.”

Wow! Obama Vows Fight With Both Parties In Congress