HomeNewsPoliticsWow! Obama Vows Fight With Both Parties In Congress

Wow! Obama Vows Fight With Both Parties In Congress 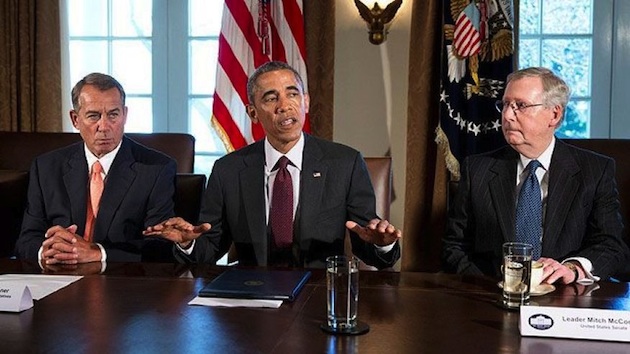 President Obama told Senate Democrats in a private meeting that he will “play offense” with the new GOP-majority Congress, and any Democrat not aboard. In a gesture that shows little hesitation about fighting with Republicans for the next two years, he vowed to issue a slew of new executive orders to tempt the new majority into a congressional crisis.

Congressional sources said Thursday Obama also threatened to fight any Democrat willing to compromise or work with the Republicans on several issues where compromise appears possible. Obama’s comments, which a few members clearly viewed as a threat — came during a summit in Baltimore, Maryland. Republican leadership, which met with the Obama on Jan. 13 at the White House, rallied their lawmakers at their own summit in Hershey, Pennsylvania.

The president already issued a series of veto threats in the opening days of the 114th Congress, including the legislation on the Keystone XL pipeline, which has passed the House and is making its way to the Senate. According to a recent PPD Poll, roughly 70 percent of American adults support the projects construction.

Yet, the president not only said he will veto that legislation, but also other pieces of legislation that have bipartisan support, such as legislation imposing additional Iran sanctions. That bill is being authored by Sens. Robert Menendez (D-NJ) and Mark Kirk (D-IL). According to The New York Times, Sen. Menendez and Obama traded “sharp words” over the issue at Thursday’s meeting, with the Democratic senator growing frustrated by the fact the president didn’t seem to care that if nuclear talks failed, then the U.S. could not be expeditiously impose sanctions.

Sen. Bob Corker (R-TN) said Thursday at the GOP retreat that Congress would seek to have a vote on any nuclear deal the U.S. and its allies strike with Iran.

Meanwhile, the House voted 236 to 191 Wednesday to block the president’s executive order on immigration, which was issued last November. The order will defer deportation for millions of illegal immigrants and offer them work permits. Currently, nearly half of the country are suing President Obama in federal court over an abuse of power. This past week, we learned the court will listen to president Obama himself stating some 25 times that he did not have the authority to issue such an order if the court finds the states have standing.

Obama met with congressional leaders of both parties at the White House earlier this week to give the appearance of bipartisanship, but the first two weeks of the congressional session point to a rough two years ahead.

Asked Thursday about the White House meeting with the president, House Speaker John Boehner said they had a “nice” and “polite” conversation.

“But I don’t know that we learned a whole lot,” he said, adding it’s “too early to tell” whether Obama got the message from the historic electoral defeat his party suffered largely due to him in 2014.

“I’m the guy born with the glass half-full. And I believe hope springs eternal,” he said. “The American people want us to find a way to address their concerns. That was the big message out of the elections. You hear it from our members on both sides of the Capitol. I’m hoping the president heard the same message.”

Judging by President Obama’s willingness to threaten his own party as well as Republicans, the glass half-full approach appears to have failed.