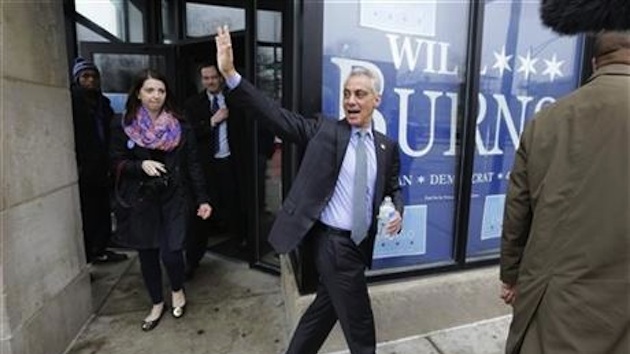 Chicago Mayor Rahm Emanuel waves to supporters as he leaves a campaign office Tuesday, April 7, 2015 in Chicago, as he and his opponent, Cook County Commissioner Jesus “Chuy” Garcia, rally supporters on the morning of the city’s mayoral runoff election. It’s the first runoff since Chicago switched to non-partisan elections 20 years ago. (AP Photo/M. Spencer Green)

CHICAGO (AP) — Mayor Rahm Emanuel won a second term Tuesday after a historic Chicago runoff election that may decide the fate and fiscal situation of the nation’s third largest city, which is currently facing serious financial challenges. But it was the management style of the former White House chief of staff that his opponents prosecuted in what is now known to be an unsuccessful campaign to strengthen the unions’ hand in city politics.

Emanuel was forced into a runoff and a heated campaign that made him barnstorm across the city to beat Cook County Commissioner Jesus “Chuy” Garcia, a union darling, former community organizer, alderman and state lawmaker. The mayor failed to capture a majority against four other candidates in the previous election in February. The mayoral runoff was the first since the city changed the way it conducts elections in 1990s.

With nearly 85 voting precincts reporting results, Emanuel was winning comfortably with 56 percent of the vote compared to 44 percent for Garcia.

“Hopefully he (Emanuel) takes heed of the runoff when he should have been a shoo-in,” said Richard Rowe, a 50-year-old, who in the end voted for the incumbent. Emanuel had contended the decision he made were difficult due to the mess left to him by his successor Mayor Richard M. Daley in 2011.

Emanuel out-raised Garcia despite the union money, which he used to flood the airwaves with ads featuring his former boss, President Barack Obama, who cast an early ballot for Emanuel from Washington.

“This is a big election with clear choices. There’s a lot at stake for the city of Chicago …” Emanuel said a day before the election at a campaign office.

Garcia accused the mayor of being out of touch with voters and blamed him for the fiscal problems, though they existed far before his tenure. In reality, it was the mayor’s push to close nearly 50 schools that drew the initial backlash, and opposition money. But Garcia also highlighted an undeniable gang violence problem that spiked during Emanuel’s first term.

He also vowed to end Chicago’s troubled red-light camera system, which some residents believe is discriminatory and focuses more on revenue than safety.

“The people had their say in Chicago,” he told supporters the day ahead of the election. “They want someone to listen to them. They said they wanted their families and their neighborhoods back and they want those things to matter to the leader of Chicago. They said they wanted change. And that’s why we’re in this historic runoff.”

Business groups, business executives and the city’s major newspapers stuck with Emanuel in the end, while Garcia enjoyed support from far-left activists, unions and the Rev. Jesse Jackson.

Polls put Emanuel ahead of Garcia in the weeks leading up to the runoff. But both sides pushed early voting and focused on get-out-the-vote efforts, particularly in minority neighborhoods. Election officials said more than 142,300 Chicago voters cast early ballots for the runoff, far outpacing early voting turnout in February and four years ago.

Rand Paul Off To The Races To Ironically Argue Electability, With Good Reason