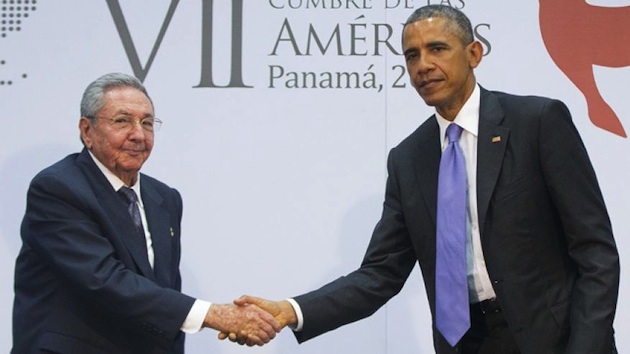 Amid a historic meeting with President Obama Saturday, Cuban President Raul Castro blamed U.S. presidents for the communist nation’s troubles in a nearly hour-long speech at the Summit of the Americas, Castro ran down a litany of Cuban grievances against the U.S. dating back more than a century.

The Cuban dictator later apologized for the charged comments, including stating the “U.S. owes a historic debt to Cuba,” but only named President Obama in the apology.

“I have told President Obama that I get very emotional talking about the revolution,” Castro said through a translator, noting that Obama wasn’t even born when the U.S. began sanctioning the island nation. “I apologize to him because President Obama had no responsibility for this.”

President Obama held a historic hour-long formal meeting with Cuban President Raul Castro Saturday at the Panama Convention Center, the first between U.S. and Cuban leaders in over half a century. The two pledged to “turn the page” and develop a new relationship between the two countries.

“What we have both concluded is that we can disagree with a spirit of respect and civility,” Obama said. “And over time, it is possible for us to turn the page and develop a new relationship between our two countries.”

While Obama said “the United States will not be imprisoned by the past,” and that “we’re looking to the future,” he didn’t forcefully pushback on the comments afterward.

Obama thanked Castro “for the spirit of openness and courtesy that he has shown during our interactions” and vowed to help “make sure that the people of Cuba are able to prosper and live in freedom and security.”

But, despite the perception of agreement the administration attempted to portray, Castro said the two had simply “agreed to disagree.”

“We are disposed to talk about everything — with patience,” Castro said in Spanish. “Some things we will agree with, and others we won’t.”

Not since 1958, when President Dwight D. Eisenhower met with Fulgenico Batista, have a U.S. and Cuban leader held a significant meeting. The following year, former Cuban dictator President Fidel Castro met with President Richard Nixon, who was serving as Eisenhower’s vice president at the time.

The Summit of the Americas this year included Cuba for the first time, and a good deal of discussion surrounded U.S. sanctions onVenezuelan officials. But the president focused on the normalization of Cuban relations, including the new changes taking effect Friday that will allow more trade and travel between the two countries.

“The Cold War has been over for a long time,” Obama said at the summit. “And I’m not interested in having battles frankly that started before I was born.”

Castro later rallied to Obama’s defense, absolving the president of fault for the U.S. blockade in a stunning reversal of more than 50 years of animosity between the United States and Cuba.

“In my opinion, President Obama is an honest man,” Castro said — a remarkable vote of confidence from the Cuban leader, who praised Obama’s life and his “humble background.”

Still, Obama stopped short of confirming the administration was set to remove Cuba from the list of state-sponsors of terrorism, claiming he has yet to study a recently competed State Department review on the issue.

For Castro, removal from the terror list is a top priority, as it would greatly increase his ability to conduct financial transactions. Castro said Cuba should never have been on the list in the first place.

“Yes, we have conducted solidarity with other peoples that could be considered terrorism — when we were cornered, when we were strongly harassed,” he said. “We had no other choice but to give up or to fight back.”

Recent reports suggest, however, that the move to drop Cuba from the list is “imminent” and already a foregone conclusion.