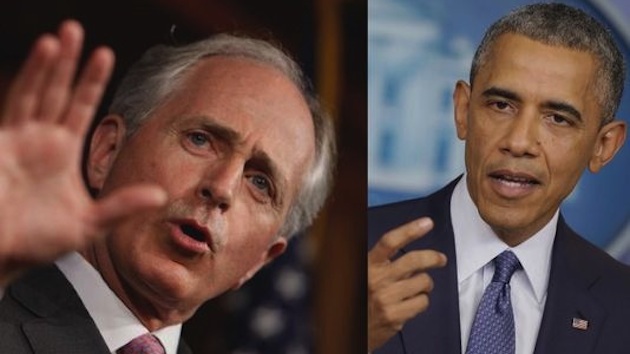 President Obama has withdrawn his veto threat on the Corker Iran bill, which passed the Senate Foreign Relations Committee unanimously Tuesday 19–0. The bill, known officially also as the Corker-Menendez bill, gives Congress a voice on the Iran nuclear deal and will now move to the full Senate for a vote.

However, critics say the development is not at all a clear victory for the Republican-controlled Senate or the American people, the vast majority of which do not trust or want Obama to have the power to make a deal with the regime in Tehran with Republican Senate consent.

Iran’s foreign minister and the Ayatollah, himself, accused the administration of lying to the American people in the “fact sheet” regarding the lifting of sanctions, an issue PPD examined and confirmed several weeks ago. Now, it would appear, that the Corker Iran bill would likely allow Obama to keep that promise.

A 60-day review period in the original Corker Iran bill was effectively cut in half to 30 days, which begins immediately after the White House submission to Congress. A rider has been attacked to that review period that would allow 12 days for the president to decide whether to veto a “resolution of disapproval” if Congress rejected the deal.

The review period would also limit Congress to just 10 days to override such a veto, meaning the president could lift sanctions after 52 days, regardless. If a final deal is not submitted to Congress by July 9, the 60-day review period will be reinstated. While that would prevent the administration from intentionally delaying the submission of the accord to Congress, critics rightfully point out that he really doesn’t need to resort to delay tactics.

Yet, Sen. Bob Corker, R-Tenn., the chairman of the Senate Foreign Relations Committee, had a different take on the changes to his bill.

“I’ve had no conversations with the White House about the substance of the bill. I’ve had only push back. Even in the Kerry presentation he was pushing back against this legislation,” Corker said during a hallway interview on Capitol Hill Tuesday. “And my sense is they know this thing has run away and very likely is going to go well beyond the veto threat.”

When asked about the concessions, Corker said the White House was playing the media, not him, for a fool.

But clearly members of his own party aren’t sold on the watered-down version of the bill, which is underscored by Sen. Ron Johnson, R-Wis., who says the Iran deal is a treaty and should be treated as such.

“If he is confident that this deal lives up to its billing, he should submit the final deal to the Senate for ratification,” Sen. Johnson said in a statement. “I will be either be introducing or supporting legislation that will require Senate ratification.”

The Senate is expected to vote on the legislation this month, and House Republican leaders have promised to pass it shortly after.

“Congress absolutely should have the opportunity to review this deal,” the House speaker, John A. Boehner of Ohio, said Tuesday. “We shouldn’t just count on the administration, who appears to want a deal at any cost.”

Meanwhile, Republicans are obviously not the only lawmakers vocalizing concerns over the deal regardless of the congressional review.

“If the administration can’t persuade 34 senators of whatever party that this agreement is worth proceeding with, then it’s really a bad agreement,” Sen. Chris Coons, D- Delaware, who sits on the Foreign Relations Committee said. “That’s the threshold.”