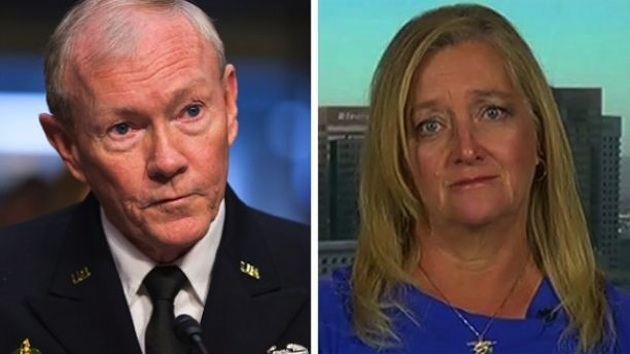 Army Gen. Martin E. Dempsey, chairman of the Joint Chiefs of Staff, left, and Debbie Lee, right, the mother of the first Navy SEAL to be killed in Ramadi, Iraq in Aug. 2006.

Chairman of the Joint Chiefs of Staff Army Gen. Martin Dempsey drew sharp criticism from the mother of the first Navy SEAL killed in Ramadi, Iraq in August 2006. In an April 16 report by Stars And Stripes, America’s top military officer responded to reports that Ramadi was all but lost to the Islamic State (ISIS) by saying it was “not symbolic in any way,” and of secondary importance juxtaposed to protecting the Beiji oil refinery.

“The city itself it’s not symbolic in any way,” he said at the Pentagon Thursday. “It’s not been declared part of [Islamic State’s] ‘caliphate’ on one hand or central to the future of Iraq… I would much rather that Ramadi not fall, but it won’t be the end of a campaign if it does.”

On Thursday, Iraqi Prime Minister Haider al-Abadi said Islamic State was attacking Ramadi strictly for propaganda, hoping to demonstrate that it’s still fighting force on the move after recently losing the battle for Tikrit, which was funded and won by Iran-backed Shiite militias. But, Gen. Dempsey’s comments gave more than an impression that oil fields were more important than Islamic State gains in the city, not to mention the fact Shiite militias responsible for the death of thousands of American soldiers in Iraq are a lesser evil.

“Once the Iraqis have full control of Beiji they will control all of their oil infrastructure both north and south and deny ISIL the ability to generate revenue through oil,” Dempsey said, using an acronym to refer to Islamic State. “So Beiji is a more strategic target and that’s why the focus right now is in fact on Beiji.”

In an open letter, Debbie Lee responded to his remarks today.

I am shaking and tears are flowing down my cheeks as I watch the news and listen to the insensitive, pain inflicting comments made by you in regards to the fall of Ramadi.

‘The city itself is not symbolic in any way.’ Oh really? Are you willing to meet with me and with the families who have lost a son, daughter, husband, wife, father, mother, aunt, uncle, grandson, or teammate?

My son Marc Lee was the first Navy SEAL who sacrificed his life in Ramadi Iraq Aug 2, 2006. His blood is still in that soil and forever will be. Remember that was when so many of our loved ones were taken from us. You said that ‘it’s not been declared part of the caliphate on one hand or central to the future of Iraq.’ My son and many others gave their future in Ramadi. Ramadi mattered to them. Many military analysts say that as goes Ramadi so goes Iraq.

I’ve traveled to Ramadi and visited Camp Marc Lee in 2007. I brought back soil from that city where Marc breathed his last. I interviewed Iraqi General Anwer in 2010 when I returned. I asked him, ‘If you could say one thing to the American people what would you tell them?’ He paused and with deep emotion said, ‘We will tell our children, our grandchildren, for generations to come we will tell them what Americans have done. There is American blood poured out on our soil.’ It seems the Iraqis understand the importance more than you do sir.

You and this administration have minimized that Ramadi could fall, now you are minimizing that it is falling, but you Sir WILL NOT minimize the sacrifice my son Marc Lee made or any of our brave warriors!

The Pentagon did not immediately respond to a request for comment made by PPD.