When one thinks what we’ve been told since the law’s passage, it’s hard to identify the biggest ObamaCare lie.

In other words, just about everything we were told was a fib. Even the tiny slivers of good news resulting from ObamaCare were based on falsehoods.

So I almost feel like I’m guilty of piling on by writing about another big Obamacare lie.

But Charles Krauthammer has such a strong critique of ObamaCare’s mandate for electronic health records that I can’t resist. He starts by pointing out that doctors are unhappy about this costly new mandate.

…there was an undercurrent of deep disappointment, almost demoralization, with what medical practice had become. The complaint was not financial but vocational — an incessant interference with their work, a deep erosion of their autonomy and authority…topped by an electronic health records (EHR) mandate that produces nothing more than “billing and legal documents” — and degraded medicine.

Not just unhappy. Some of them are quitting and most of them are spending less time practicing actual health care.

Virtually every doctor and doctors’ group I speak to cites the same litany, with particular bitterness about the EHR mandate. As another classmate wrote, “The introduction of the electronic medical record into our office has created so much more need for documentation that I can only see about three-quarters of the patients I could before, and has prompted me to seriously consider leaving for the first time.” …think about the extraordinary loss to society — and maybe to you, one day — of driving away 40 years of irreplaceable clinical experience.

Then Krauthammer exposes the deceptions we were fed when Obamacare was being debated.

The newly elected Barack Obama told the nation in 2009 that “it just won’t save billions of dollars” — $77 billion a year, promised the administration — “and thousands of jobs, it will save lives.” He then threw a cool $27 billion at going paperless by 2015. It’s 2015 and what have we achieved? The $27 billion is gone, of course. The $77 billion in savings became a joke. Indeed, reported the Health and Human Services inspector general in 2014, “EHR technology can make it easier to commit fraud,” as in Medicare fraud, the copy-and-paste function allowing the instant filling of vast data fields, facilitating billing inflation.

A boondoggle on the back of taxpayers. Flushing $27 billion is bad enough, but the indirect costs also are large.

That’s just the beginning of the losses. Consider the myriad small practices that, facing ruinous transition costs in equipment, software, training and time, have closed shop, gone bankrupt or been swallowed by some larger entity. …One study in the American Journal of Emergency Medicine found that emergency-room doctors spend 43 percent of their time entering electronic records information, 28 percent with patients. Another study found that family-practice physicians spend on average 48 minutes a day just entering clinical data.

EHR is health care’s Solyndra. Many, no doubt, feasted nicely on the $27 billion, but the rest is waste: money squandered, patients neglected, good physicians demoralized.

Not much ambiguity in that sentence. To put it bluntly, “EHR” is the kind of answer you get when you ask a very silly question. 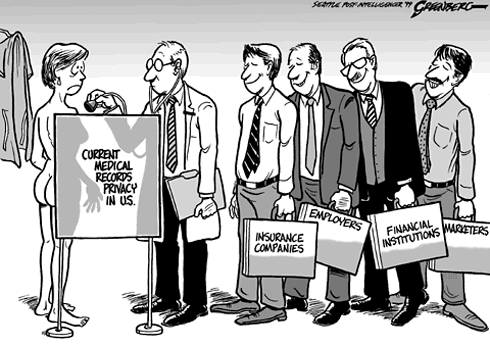 But on a more serious note, now read what Dr. Jeffrey Singer wrote about electronic health records. Simply stated, this is like Solyndra, but much more expensive. Instead of wasting a few hundred million on cronyist handouts to Obama campaign donors, EHR is harming an entire sector of the economy.

The only thing I’ll add is that neither Krauthammer nor Singer contemplated the possible risks of amassing all the information contained in EHRs given the growing problem of hacking and identity theft.

P.S. On another topic, I’ve written several times about the excessive pay and special privileges of bureaucrats in California.

Now, thanks to Reason, we can read with envy about another elitist benefit for that gilded class.

…a little-known California state program designed to protect police and judges from the public disclosure of their home addresses had expanded into a massive database of 1.5 million public employees and their family members… Because of this Confidential Records Program, “Vehicles with protected license plates can run through dozens of intersections controlled by red light cameras and breeze along the 91 toll lanes with impunity,” according to the Orange County Register report. They evade parking citations and even get out of speeding tickets because police officers realize “the drivers are ‘one of their own’ or related to someone who is.”

You may be thinking that the law surely was changed after it was exposed by the media.

And you would be right. But if you thought the law would be changed to cut back on this elitist privilege, you would be wrong.

…the legislature did worse than nothing. It killed a measure to force these plate holders to provide their work addresses for the purpose of citations — and expanded the categories of government workers who qualify for special protections. This session, the legislature has decided to expand that list again, never mind the consequences on local tax revenues, safety and fairness. …Given the overwhelming support from legislators, expect more categories to be added to the Confidential Records Program — and more public employees and their families being free to ignore some laws the rest of us must follow.

This is such a depressing story that I’ll close today with this bit of humor about bureaucracy in the Golden State.

O'Malley: "Presidency not a Crown to be Passed Back and Forth by Royal Families"