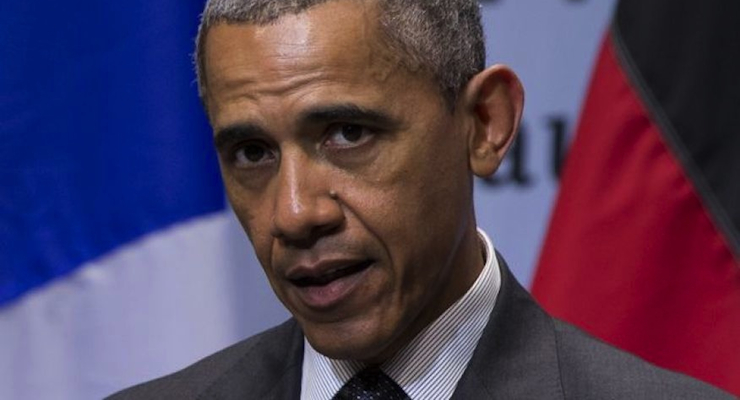 President Obama bullies Supreme Court as he speaks at a press conference during the G-7 summit in Germany Monday June 8, 2015.

Speaking during a press conference in Germany Monday, President Obama again made an effort to bully the Supreme Court over the upcoming ObamaCare ruling. The president’s remarks came ahead of the much-anticipated King v. Burwell decision, which could gut the president’s deeply unpopular signature healthcare law by siding with the lower courts that ruled them unconstitutional.

“This should be an easy case. Frankly, it probably shouldn’t even have been taken up,” Obama said. He said it’s safe to “assume” the court will do what most legal scholars expect and “play it straight.” Obama said it has been well-documented that Congress never intended to exclude people who went through the federal exchange.

If the Supreme Court rules against the decision by his administration to offer subsidies through the federal exchange, then it could only be based on a “contorted reading of the statute” and a “twisted interpretation.”

Except, the president’s claims fly in the face of both the historical congressional record and the statements made by the now-infamous ObamaCare architect Jonathan Gruber. Gruber, the MIT economist who helped write ObamaCare, was the star of a series of videos in which he admitted that the law passed by Congress never provided for federal subsidies. He is better known, however, for the following comments:

“Lack of transparency is a huge political advantage,” said Gruber. “And basically, call it the stupidity of the American voter or whatever, but basically that was really, really critical for the thing to pass. You can’t do it political, you just literally cannot do it. Transparent financing and also transparent spending. I mean, this bill was written in a tortured way to make sure CBO did not score the mandate as taxes. If CBO scored the mandate as taxes the bill dies. Okay? So it’s written to do that.”

Following the initial filing of the lawsuit to be decided upon by the high court by the end of the month, Gruber did a series of interviews and made a number of outrageous comments and accusations, including calling those who say the law should be interpreted as it was written “screwy,” “nutty,” “stupid,” and “desperate.”

“Literally every single person involved in the crafting of this law has said that it`s a typo,” Gruber said in an interview with MSNBC.

However, despite the president’s claims after the fact, Gruber, who recently said that he knew “more about this law than any other economist,” admitted back in 2012 that subsidies were only permitted per the law in SBMs, or state-based exchanges. But don’t take our word for it.

“I think what’s important to remember politically about this is if you’re a state and you don’t set up an exchange that means your citizens don’t get their tax credits. But your citizens still pay the taxes that support this bill. So you’re essentially saying to your citizens, you’re going to pay all the taxes to help all the other states in the country. I hope that that’s a blatant enough political reality that states will get their act together and realize there are billions of dollars at stake here in setting up these exchanges and that they’ll do it, but you know once again the politics can get ugly around this,” Gruber said.

And just in case you need more evidence, an audio emerged that can be heard via YouTube in this next clip, during which Gruber again repeats concerns over the law’s barring of federally distributed subsidies. He clearly didn’t view the language as a clerical error, or “typo.”

Yet, Obama administration has repeatedly argued the legislative language implies the federal exchange can be used to offer people ObamaCare subsidies in the event states did not take the 3-year diminishing bribe and set up state-based exchanges. Unfortunately, on July 22, 2014 the powerful D.C. Circuit Court of Appeals agreed with Gruber’s past statements revealed in the videos and invalidated ObamaCare subsidies for health insurance obtained through the federally run exchange, HealthCare.gov.

To better understand how this could have happened, let’s first review the situation in its proper historical context.

The House, at that time, was still in Democratic control under the direction of former Speaker now-Minority Leader Nancy Pelosi, and they passed a version of the bill that included language one could argue did, indeed, extend ObamaCare subsidies beyond state-based exchanges. The Senate, however, was another story.

In a shocking rebuke of the law, which Americans never wanted and still do not want, Scott Brown was elected in deep Blue Massachusetts to replace the late liberal Sen. Ted Kennedy, a long-time advocate of government-run healthcare.

Democrats simply didn’t have the votes to take up another piece of legislation similar to the even more centralized House bill. They had no choice but to settle on the version that had already been passed in the Senate, which specifically barred ObamaCare subsidies for consumers in states that did not set up SBMs, or state-based marketplaces. The House went on to pass the Senate version, and here we are.

This isn’t the first time President Obama has openly and publicly scolded the Supreme Court. In fact, it isn’t the first time he bullied them over ObamaCare, or played loose with the facts in his claims. First, during his 2010 State of the Union Address, Obama slammed the justices over the Citizen’s United ruling, claiming that it opened up America’s political process to manipulation by “foreign corporations.”

A video of Justice Samuel Alito shaking his head back-and-forth mouthing the words “not true” or “that’s not true” went viral. Exactly which version of the phrase he said is up to interpretation, thus we bring you the video:

In the weeks after oral arguments were heard by the court on the individual mandate, which was upheld when Chief Justice John Roberts decided to rewrite the law and uphold what he initially ruled to be unconstitutional, President Obama essentially threatened the court in the Rose Garden. We will soon find out if bullying once more prevented Chief Justice Roberts and the other conservative justices from dismantling the so-called Affordable Care Act based upon the constitutionality of the law.

Meet Team Hillary 2016: Players, Pollsters and Pockets Behind the Campaign