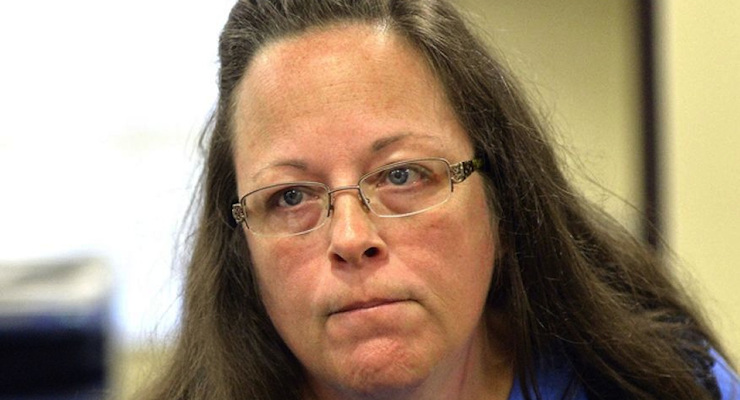 Davis, a clerk in Rowan County, and her deputy clerks were summoned to appear before U.S. District Judge David Bunning, who said his only alternative was to order her to jail because he did not believe she would comply with his order even if she were fined. She was escorted out of his courtroom by a deputy, although not in handcuffs, and ordered to be turned over to the custody of federal marshals.

In her roughly 20 minutes of very emotional testimony, Davis told the story about how she became a Christian and is now unable to believe anything else. April Miller, who said she voted for Davis in the election, also testified and said that this was only about getting her license, not about trying to change Davis’ beliefs, which is the criticism of supporters of religious liberty.

A small plane flew over the courthouse, carrying a banner that said: “Stand Firm Kim.” Following the ruling, supporters of gay marriage outside the federal courthouse chanted and screamed, “Love won! Love won!”

Davis stopped issuing licenses to all couples in June after the U.S. Supreme Court effectively shutdown debate and legalized gay marriage in all 50 states. But, despite the Supreme Court and other court rulings against her, she continued to turn away gay couples seeking a marriage license. The couples who originally sued in the case asked Bunning to punish Davis with fines, but not jail time.

“I have no animosity toward anyone and harbor no ill will. To me this has never been a gay or lesbian issue,” Davis, an Apostolic Christian said in a statement, adding that she never thought this day would ever come. “It is about marriage and God’s word.”

Her critics mock her moral stand, pointing out that Davis is on her fourth husband after being divorced three times. Of course, Christianity is about forgiveness of sin. Both sides of the argument have a strong case to make against the other on passing judgement. Davis served as her mother’s deputy in the clerk’s office for 27 years before she was elected as a Democrat to succeed her mother in November. As an elected official, she can be removed only if the Legislature impeaches her, which Kentucky lawmakers are highly unlikely to do in a deeply conservative state that opposes gay marriage by a large majority.

While Judge Bunning, the son of Jim Bunning, the Hall of Fame pitcher for the Detroit Tigers and Philadelphia Phillies, was nominated by Republican President George W. Bush for a lifetime position as a federal judge in 2001 when he was just 35 years old, his judicial record is coming under some scrutiny. In 2003, Bunning ordered the Boyd County School District to allow the student club Gay-Straight Alliance to meet on campus. In 2007, he was on a three-judge panel on a federal appeals court that overturned Michigan’s highly popular ban on partial-birth abortion. The panel ruled the state’s law was too broad and would outlaw other legal forms of abortion.

Following the Supreme Court decision, PPD examined the public opinion and voting data to argue the ruling would not settle the issue, but rather exacerbate it as Chief Justice John Roberts warned in the dissent. Despite the recent polls cited by supporters, fake studies published in Science Journal are simply not as convincing as the Chief Justice’s argument.

Only 11 states redefined marriage democratically before the high court weighed in, including 8 through their legislatures and 3 through popular vote. In the 37 states that recognized gay marriage before the Supreme Court decision, 26 were forced to do so by courts and 21 of them voted against it with at least 60 percent of the vote.

Including 2012, when the state of North Carolina voted overwhelmingly (61 percent) to ban same-sex marriage, more than 50 million Americans have weighed in on whether to change the definition and institution of marriage at the ballot box. Those results are very much in line with the average across the nation. Overall, if we average the results from each referendum, a whopping 67.7 percent of the 50 million Americans who voted on same-sex marriage voted against it.