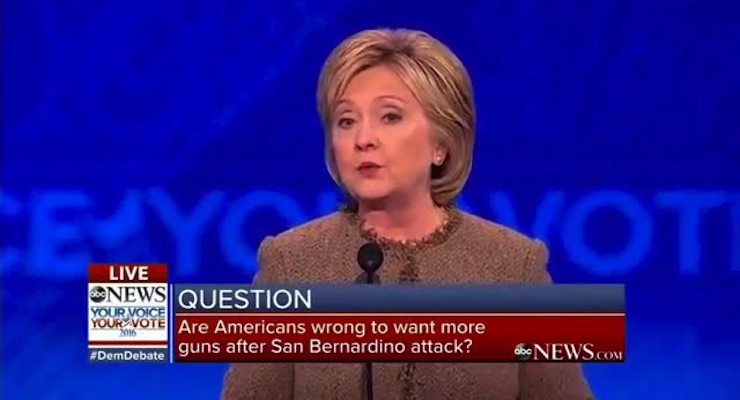 Hillary Clinton answers a question on gun control at the Democratic debate on Dec. 20, 2015.

When asked Saturday night during the Democratic debate (video below), Democratic frontrunner Hillary Clinton said Americans are wrong to think more guns will prevent their untimely death by terror, and insinuated bigotry toward Muslims is more dangerous than being defenseless against Islamic radical terrorists shooting up soft targets. Polls taken in the wake of the San Bernardino terror attack clearly showed the vast majority of Americans disagree with Democrats’ push for stricter gun laws.

“In the wake of the San Bernardino attack, you all emphasized gun control. But our latest poll shows that more Americans believe arming people, not stricter gun laws, is the best defense against terrorism. Are they wrong?” the moderator asked.

“Guns in and of themselves, in my opinion, will not make Americans safer. We lose 33,000 people a year already to gun violence. Arming more people, to do what, is not the appropriate response to terrorism,” Clinton replied.

In fact, public opinion over the last twenty years has moved significantly away from Clinton’s position. In 1995, a whopping 67% of Americans supported her husband’s ban on “assault weapons” while 27% opposed it. But the same New York Times poll conducted last week found 50% oppose an assault weapons ban and only 44% support it. These results are especially remarkable because, as PPD’s research has found, many non-gun owners indeed think “assault weapon” refers to a machine gun.

Clinton added that we instead need to develop “much deeper, closer relations” and “coalitions” within the U.S. to stop terrorism domestically. Clinton said it was more important to make coalitions within the Muslim community, but rhetoric from Republican frontrunner Donald Trump is hindering that effort.

Of course, despite the fact that Clinton and President Obama have reached out to organizations that share jihadists’ goals, “they’re underestimating the wisdom of the American people,” as CATO economist and PPD contributor Dan Mitchell recently pointed out.

“Most Americans may not have strongly held philosophical views on gun issues, but they’re smart enough to realize that bad people almost certainly will be able to obtains guns, even if they have to do so illegally, as is the case in Europe.,” Mitchell noted. “So the net result of gun-free zones and gun control is more danger to the public since evil people will have greater confidence that victims will be disarmed.”

Mrs. Clinton is also taking an enormous amount of heat from fact-checkers over her claim that ISIS uses video of The Donald to recruit more jihadists. Of course, no such video exists. Further, as Raheel Raza recently noted in a new video produced by The Clarion Project, groups like the Council on American-Islamic Relations (CAIR) and the Muslim Brotherhood, which the Left has dubbed to be legitimate “moderate” Muslim organizations, hold many of the same beliefs as jihadists carrying out terror attacks, such as implementing Islamic Sharia law and global domination. Ms. Raza, the president of Muslims Facing Tomorrow, has herself been a target of radical Islam and hosted the video to start an honest discussion about Muslim opinions and demographics.

Cruz Christmas Classics: "The Senator Who Saved Christmas" Appeals to Evangelical Base in Iowa

Trump Rips Hillary for False ISIS Claim: "She's a Liar and Everybody Knows That"