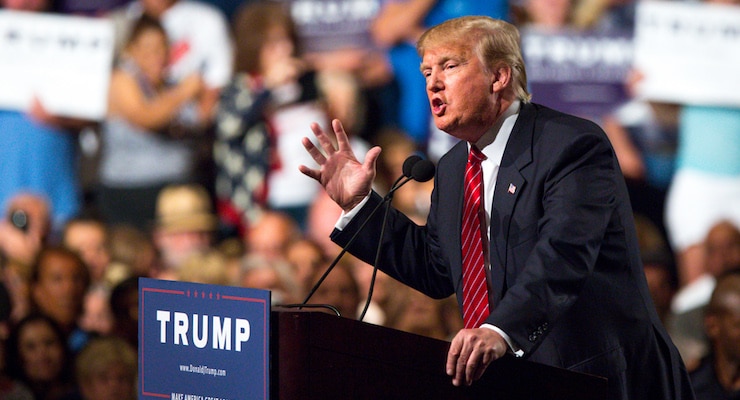 Republican frontrunner Donald J. Trump has easily won the Arizona Republican Primary, defeating Sen. Ted Cruz and hauling in 58 more total delegates. The winner-take-all state is the biggest prize of the night, though Sen. Cruz is hoping to earn more than 50% of the vote in Utah.

Mr. Trump held a double-digit lead in the PPD average of Arizona Republican primary polls leading up to Tuesday. He also enjoyed the backing of former Arizona Gov. Jan Brewer and Maricopa County Sheriff Joe Arpaio, two of the most outspoken voices on illegal immigration.

The terrain for the frontrunner is going to get more friendly moving forward.

“While Sen. Cruz is very likely to pull a big win in Utah, Mr. Trump is more likely than not to reach the majority needed to secure the nomination,” said PPD’s senior political analyst Richard Baris. “The states coming up just make it more difficult for non-Trump candidates.”

In New York, which holds its primary on April 19, a recent poll conducted by [content_tooltip id=”38226″ title=”Emerson College Polling University”] finds Mr. Trump leading his closest rival Sen. Cruz 64% to 12%, making the frontrunner the only Republican candidate to receive majority support among voters in his own state. While both Sen. Cruz and Gov. Kasich won their respective home states, they did so with a less-than impressive margin of victory.

Mr. Trump leads by a smaller 54.5% to 11.5% on the PPD average of New York Republican primary polls, but if it holds is still sufficient to force the Empire State into a winner-take-all for 95 delegates.

Trump is looking forward to contests in California (172), New Jersey (51), Indiana (57), Pennsylvania (71) and other delegate-rich states where he is favored to win. On April 5 in Wisconsin, which awards 42 total delegates on a winner-take-all basis, the state of the race is unclear from polling. Demographically, as was the case in Michigan, a large number of working-class voters could work in Trump’s favor.