HomeNewsPoliticsDid Bill Clinton Waste His Wife’s Get Out of Jail Free Card?

Did Bill Clinton Waste His Wife’s Get Out of Jail Free Card? 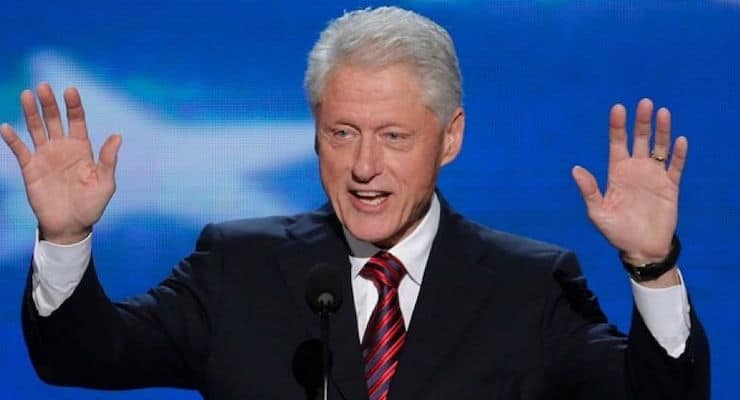 By meeting secretly with U.S. Attorney General Loretta Lynch, former President Bill Clinton might have inadvertently cut his wife’s political safety net. Under mounting public pressure and political fallout, Attorney General Lynch on Friday vowed to accept the recommendation from the Federal Bureau of Investigation (FBI) and career prosecutors at the Department of Justice (DOJ).

First, no one in Washington, D.C.–to include Democrats and Democrat-friendly journalists–believes the former president was hoping to do anything but influence the outcome of the federal investigation into his wife by meeting on her government airplane at Phoenix Sky Harbor International Airport. Mrs. Clinton, the presumptive Democratic nominee and former secretary of state, is the subject of two federal investigations.

“I will be accepting those recommendations,” AG Lynch said at Aspen Institute in Colorado. “That will include not only the factual findings in this matter, but the next step.”

As PPD previously reported, the investigation into her use of a private server to conducted official State Department business was expanded in January to include “public corruption” relating to her activities at the Clinton Foundation. Essentially, the FBI is looking into whether Mrs. Clinton sold access during her tenure as secretary of state, in addition to whether she mishandled classified information.

The meeting, which AG Lynch said she “certainly wouldn’t do” again, could have the adverse impact than the former president originally intended.

Sources tell People’s Pundit Daily the FBI agents on the case were very upset with the attorney general’s decision to hold a secret meeting with the former president. Words to describe their reaction included “pissed,” “fuming” and “livid.” The FBI investigation, which is being handled by the “A-Team” and now includes roughly 150 agents, is in fact a criminal investigation that characterizes the former president as a witness. The Clinton campaign has sought to describe the investigation as a “security review,” a claim the FBI director himself disputed.

“We’re conducting an investigation. That’s the bureau’s business. That’s what we do here at the FBI,” Director Comey said in May. “I’m not familiar with the term ‘security inquiry’.”

One theory floating around D.C. is that an indictment is imminent and the meeting aimed to create an ethics violation. In this scenario, despite AG Lynch’s announcement Friday, news of the development would lead to more political pressure for the appointment of an independent special council. That would prolonged the investigation beyond the presidential election. While it may seem far fetched, a report by the Daily Caller this week suggests stonewalling has already begun.

The Department of Justice filed a motion in federal court late Wednesday requesting a 27-month delay in producing documented communications between former Secretary Clinton’s four top aides, officials at the Clinton Foundation and Teneo Holdings, which is a closely associated public relations firm that Mr. Clinton helped to establish.

If the court agrees, the American public won’t be able to read the communications until October 2018, or if she wins in November roughy 22 months into her first term as President of the United States. The four senior Clinton aides involved were Deputy Assistant Secretary of State Michael Fuchs, Ambassador-At-Large Melanne Verveer, Chief of Staff Cheryl Mills and Deputy Chief of Staff Huma Abedin.

The latter two are involved knee-deep in Mrs. Clinton’s potential violations of the Federal Records Act and Espionage Act. Interviews conducted by the FBI resulted in Mrs. Mills repeatedly storming out of the room and consulting with her lawyer.

Yet another theory speculates whether Mr. Clinton was not only pleading for his wife during his meeting with AG Lynch but also for himself.

“He is a person of interest officially to the Department of Justice,” former U.S. Attorney Joseph DiGenova said.

President Clinton became a pivotal figure behind Lynch’s federal career when he appointed her U.S Attorney for the Eastern District of New York in 1999. The post is not only one of the most coveted prosecutorial posts in the country, but also thought to be a launching pad to her current position. He also played a pivotal role in the potential acts of public corruption under investigation, including his relationship with Frank Giustra.

Mr. Giustra, a Canadian mining magnate, gave $100 million of his personal wealth to form two projects with Bill Clinton, known as the “Clinton-Giustra Sustainable Growth Initiative” and the “Clinton-Giustra Enterprise Partnership.” Mr. Giustra secured approval for a waiver from the office of the Secretary of State for Rosatom–the Russian atomic energy agency–to invest in Giustra’s Uranium One, a company that owned uranium ore mines in Eastern Europe and in the United States. The materials, for obvious reasons, are considered a national security concern and resource.

The deal was closed with the help of former President Bill Clinton and it awarded “one-fifth of all uranium production capacity in the United States,” as reported by the New York Times.

But cynics claim AG Lynch would never have taken her hands off the wheel–to effectively allow the wife of the man who started her federal law enforcement career to be prosecuted–unless the fix was already in. The Clintons, the cynics argue, would never waste one of the get out of jail free cards they spent years collecting in excuse for favors in the political arena. Whether we find out the answers to these questions before the presidential election in November is far from certain.

Director Comey, a Republican with a strong reputation for independence and fairness, could put an end to speculation after a year-long probe by recommending to the Department of Justice whether or not to pursue an indictment. While Director Comey has repeatedly said the Bureau doesn’t operate on political timelines, sources have told People’s Pundit Daily a decision is “close,” though provided no timeframe.

Loretta Lynch: "I Will Be Accepting the Recommendations" in Clinton Email Investigation