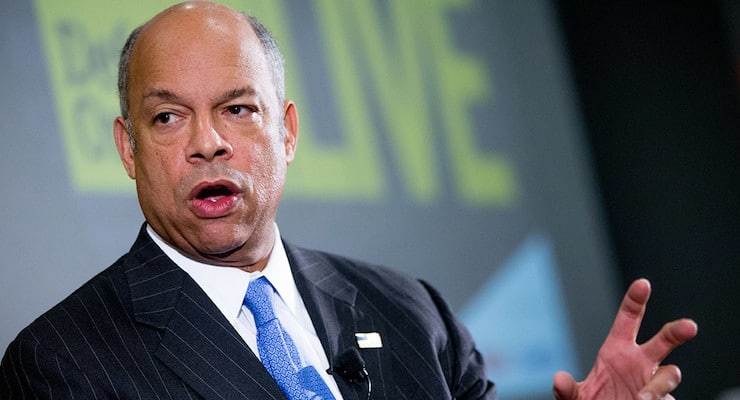 Homeland Security Secretary Jeh Johnson spoke this weekend at an annual conference held by the Islamic Society of America (ISNA), a group tied to the radical Muslim Brotherhood. He told those in attendance that their “story is the quintessential American story,” delivering what The Washington Post called an “impassioned speech” to members.

The ISNA was established in July 1981 by U.S-based members of the Muslim Brotherhood with a background as leaders of the Muslim Students Association (MSA). The Muslim Students Association, which was also founded by Muslim Brotherhood members, would later establish the ISNA and was dependent upon funding from radical Wahabbiast in Saudi Arabia during its early years. The group ISNA was an unindicted co-conspirator in the Holy Land Foundation trial, a prosecution halted by the Obama administration that was the result of a Federal Bureau of Investigation probe that revealed what is known as “Civiliation Jihad.”

“In fact, the Holy Land Foundation was based within the ISNA building,” Meira Svirky at The Clarion Project reported. “ISNA also deposited checks into its account that were made out to the ‘Palestinian Mujahadeen [jihadi fighters],’ the name used at the time for Hamas’s military wing. The funding was transferred to the Holy Land Foundation.”

Civiliation Jihad is a plot to take down the United States from within by literally converting and breeding out traditional Americans until Muslims become a majority in the U.S., allowing the replacement of the U.S. Constitution with Sharia. While this is the non-violent form of jihad, speakers at the conference also included those who preach and support “combative jihad” with the use of violence, such as Jamal Badawi.

Mr. Badawi is a founder of another Muslim Brotherhood-linked group known as the Muslim American Society. In has praised the terror group Hamas and was listed in the Muslim Brotherhood directory. Nihad Awad, founder and executive director of the Council on Islamic American Relations (CAIR), another U.S. Brotherhood entity and unindicted co-conspirator in the Holy Land terror financing case, also spoke at the event.

Another notable speaker was Khizr Khan, the father in the Gold Star family who attacked Republican presidential candidate Donald Trump at the Democratic National Convention. As has now been reported by numerous outlets, Mr. Khan worked at Hogan Lovells LLP, a U.S. law firm hired by the Saudis where he specialized in pushing through applications for Muslim immigration in exchange for lucrative fees. They have deep ties to the Clinton Foundation.

Secretary Johnson has become the highest-ranking U.S. official to address the annual ISNA conference. Valerie Jarrett, another top advisor to President Obama, spoke at the ISNA conference in 2009. Worth noting, a 2011 Gallup poll found only 4% of U.S. Muslim males and 7% of females identified the ISNA as the organization that most represents their own interests. CAIR didn’t fair much better, though a Pew Research survey found a slight majority of American Muslims overall favor the practice of Sharia over the U.S. Constitution.