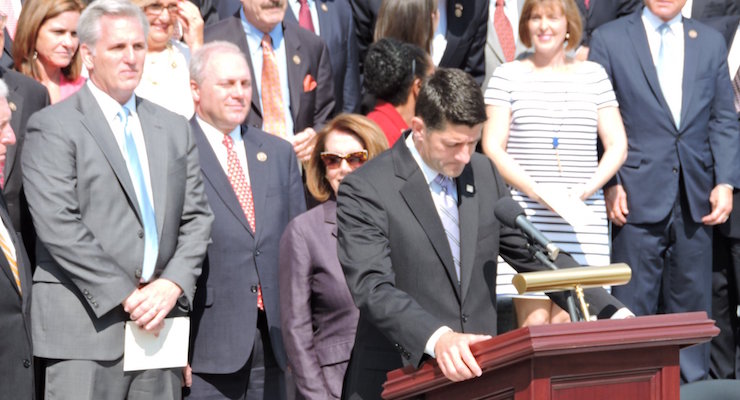 Despite Threats from White House and Riyadh, Bill Passes in Both Houses of Congress

The GOP-controlled House of Representatives passed a Senate bill allowing the 9/11 victims’ families to sue Saudi Arabia, setting up a veto showdown with President Obama. In May, the GOP-controlled upper chamber unanimously approved Senate bill 2040 (S.2040), known as the Justice Against Sponsors of Terrorism Act, ignoring threats from the White House and Riyadh to pull billions of dollars from the U.S. economy if the bill is enacted.

It “amends the federal judicial code to narrow the scope of foreign sovereign immunity by authorizing U.S. courts to hear cases involving claims against a foreign state for injuries, death, or damages that occur inside the United States as a result of a tort, including an act of terrorism, committed anywhere by a foreign state or official.”

The sponsors of the bipartisan bill in the Senate, Sens. Charles Schumer, D-N.Y., and John Cornyn, R-Texas, called on the Republican House of Representatives to pass the bill and now they have. The legislation gives victims’ families the right to sue in U.S. court for any role that elements of the Saudi government may have played in the 2001 attacks that killed thousands in New York, the Washington, D.C. area and Pennsylvania. The White House warned of “unintended consequences,” saying the bill would “change longstanding international law regarding sovereign immunity and the president continues to harbor serious concerns this legislation would make the U.S. vulnerable in other court systems around the world.”

Relatives of Sept. 11 victims had been urging the Obama administration to declassify and release U.S. intelligence that allegedly discusses possible Saudi involvement in the attacks. In July, a 28-page 2002 congressional report on the September 11, 2001 terror attacks was released Friday and indicated some of the hijackers had ties to people in the Saudi government. The report cited the reason for a “limited understanding” of Saudi Arabia’s role and financing of terror groups as an unwillingness to investigate “due to Saudi Arabia’s status as an American ‘ally.’”

It also revealed that in 2002–only a year after the deadliest terror attacks in U.S. history–the Federal Bureau of Investigation (FBI) had numerous leads indicating ties between Saudis in America and some of the hijackers, specifically the two that took control of Flight 77, which crashed into the Pentagon. Further, it links associates of the hijackers and Saudi Arabian Prince Bandar bin Sultan, the former longtime ambassador to the United States. In a phone book found on al-Qaeda operative Abu Zubaydah, who was captured in Pakistan in 2002.

The bill also “amends the federal criminal code to permit civil claims against a foreign state or official for injuries, death, or damages from an act of international terrorism. Additionally, the bill authorizes federal courts to exercise personal jurisdiction over and impose liability on a person who commits, or aids, abets, or conspires to commit, an act of international terrorism against a U.S. national.

At Fundraiser, Clinton Calls Half of Trump Voters a "Basket of Deplorables"