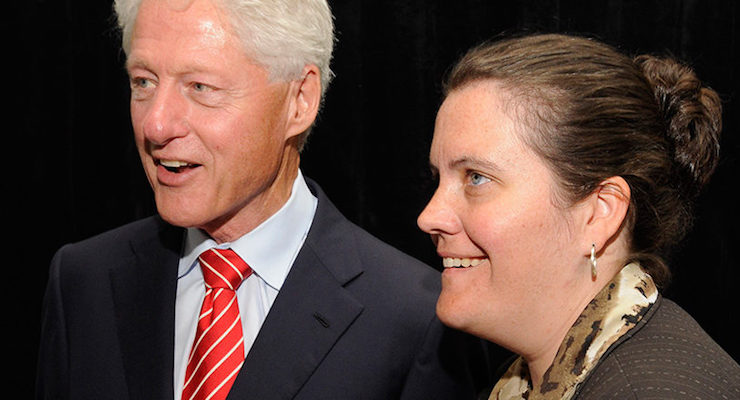 Laura Graham served as Bill Clinton’s chief of staff during his post-presidency; she was also chief operating officer of the Clinton Foundation. Here, Graham and Clinton are pictured after a campaign rally for then-Congressman Michael McMahon, held at Wagner College, in September 2010.

Late last night, laura graham called me as she couldn’t reach my brother or her shrink. She was on staten island in her car parked a few feet from the waters edge with her foot on the gas pedal and the car in park. She called me to tell me the stress of all of this office crap with wjc and cvc as well as that of her family had driven her to the edge and she couldn’t take it anymore. I spent a while on the phone with her preventing her from doing that, as I have a few times in the past few months, and was able to reach roger and her shrink.

WJC and CVC refer to William J. Clinton and Chelsea Victoria Clinton, the husband and daughter of Democratic presidential nominee Hillary Clinton. In 2000, Bill Clinton’s final year in office, Laura Graham served as deputy director of White House scheduling. At age 27, she was one of the youngest people ever to hold a deputy assistant position in the White House, reporting directly to one of the president’s senior staff members. Later, she went on to serve as the COO, or Chief Operation Officer at the Clinton Foundation.

Bruce said the stress of specifically the office had caused his very serious health issues as you both know. But I’m sure chelsea is more concerned with a mostly false story in the distinguished ny post about mf global and teneo not her role in what happened to laura/bruce, what she is doing to the organization or the several of stories that have appeared in the ny post about her father and a multitude of women over the years.

In his mentioning of “bruce,” Band is likely referring to Bruce Lindsey, the foundation’s chairman of the board. He is criticizing Chelsea for not caring about how two top foundation officials are being treated at the office.

Neither the Clinton campaign nor officials at the Clinton Foundation, Clinton Global Initiative responded to a request for comment.

“Life is to short so let’s have a call and get this over with,” Band concluded.

Meanwhile, in a separate 2011 email dated November 13, right around the time Chelsea began to take a lead role at the foundation, Band expressed concern that something could become public. Band was one of three partners who started Teneo Holdings, a global consulting firm. Huma Abedin, Mrs. Clinton’s other top aide for many years, was a senior advisor to Teneo at the very same time she held a top position as part of her inner circle at the State Department. President Clinton was both a paid adviser to Teneo, and a client.

The firm outright dismissed a U.S. Senate panel’s probe in 2013 suggesting and investigating whether it had undue influence at the State Department under then-Secretary Clinton.

“I’m also starting to worry that if this story gets out, we are screwed,” he said. “Dk and I built a business. 65 people work for us who have wives and husbands and kids, they all depend on us.”

Dk refers to Declan Kelly, one of the firm’s other three partners. Publicly, they scoffed off the Senate Judiciary Committee probe as “insignificant” in a letter.

“I realize it is difficult to confront and reason with her [Chelsea] but this could go to far and then we all will have a real serious set of other problems [sic]. I don’t deserve this from her and deserve a tad more respect or at least a direct dialogue for me to explain these things,” Band added. “She is acting like a spoiled brat kid who has nothing else to do but create issues to justify what she’s doing because she, as she has said, hasn’t found her way and has a lack of focus in her life. I realize she will be off of this soon but if it doesn’t come soon enough….”