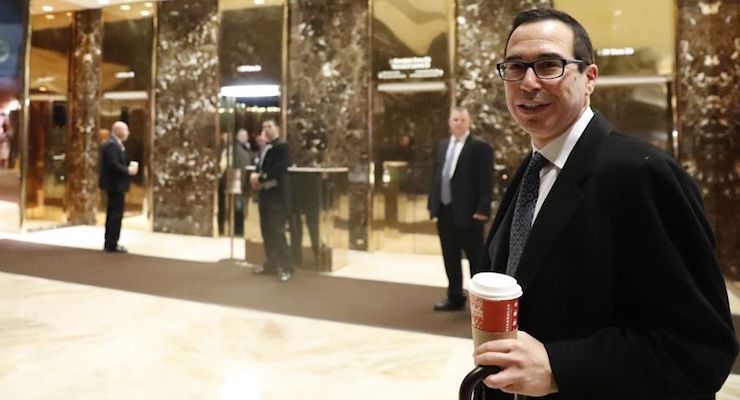 The Senate voted 52 – 47 to confirm Steven Mnuchin as the U.S. Treasury Secretary under President Donald J. Trump after weeks of Democrats dragging their feet. Mnuchin served as the national finance chairman for the Trump campaign, a decision he made after the president-elect won the New York Republican primary and one his Wall Street buddies questioned vociferously.

Far-left groups funded by Soros and his son were waging a campaign to defeat President Trump’s pick to head up the U.S. Treasury Department, which analysts worried may start to take a toll on the markets.

The former partner of Goldman Sachs Group Inc (NYSE:GS) was involved with the team that bought the failing California mortgage lender IndyMac from the government in 2009 following the financial crisis. It was renamed OneWest after he became chairman of the company, which was ultimately sold to the nation’s largest small-business lender (CIT) in 2015 for more than twice what the group paid for it.

But the same deal that won him accolades from the business community and The Wall Street Journal became the main subject matter used by Progressive Change Campaign Committee (PCCC) and others who opposed his nomination. But they failed and Mr. Mnuchin made his way immediately to Vice President Mike Pence who was waiting at the White House to swear him in.

As for the deal, it was backed by a collection of 14 nonprofit groups that received a combined $5.95 million from OneWest. The $3.4 billion deal may not have even gone through without their supportive letters. At his confirmation hearing, Mr. Mnuchin vehemently denied Big Media reports claiming he ran a “foreclosure machine,” which of course are planted and pushed at the behest of Sen. Warren and groups like MoveOn and PCCC.

In truth, Soros the elder met with Democratic Party leadership in Washington D.C. during a conference a week after the Nov. 8 presidential election to discuss the Left’s strategy to sabotage President-elect Trump during his first 100 days. Obstruction of Cabinet nominees was at the top of their list at the conference, which was attended by leftwing Sen. Elizabeth Warren, D-Mass., as well as Senate and House Democratic leadership.

Sen. Warren, who led a group of 10 Democratic senators at a forum to hear testimony from some of the people who lost their homes after Mr. Mnuchin’s bank foreclosed, also happens to be PCCC’s favorite senator.

During his hearing, he told the Senate Finance Committee that his bank extended over 100,000 loan modifications to borrowers who were behind on their mortgage payments. Before he took over IndyMac, which had already become the second biggest bank failure of the financial crisis, it had one of the worst portfolios stuffed with bad mortgage loans “in the history of time.”

“Unfortunately, not all of the homes could be saved through these programs and despite my best efforts, some were sadly subject to foreclosure.” The guidelines Mr. Mnuchin used at OneWest to offer loan modifications were put in place by numerous government programs, with limitations.