HomeNewsPoliticsMcConnell: ‘We’re Going to Get Judge Gorsuch Confirmed This Week‘

McConnell: ‘We’re Going to Get Judge Gorsuch Confirmed This Week‘ 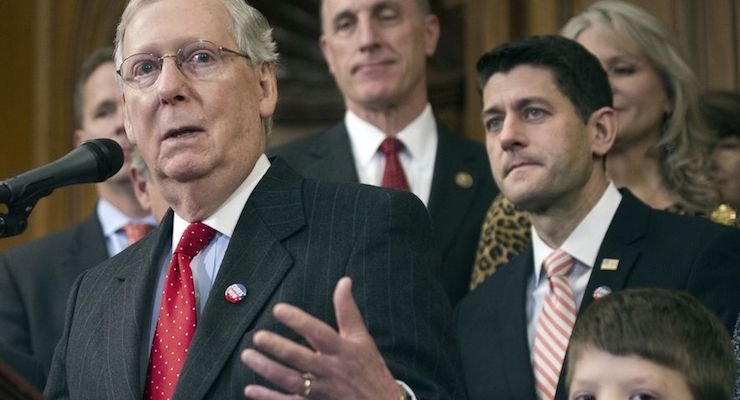 House Speaker Paul Ryan of Wisconsin and others listen as Senate Majority Leader Mitch McConnell of Kentucky speaks on Capitol Hill in Washington on Dec. 8, 2016.

Judge Gorsuch, 49, who serves on the U.S. Court of Appeals for the 10th Circuit in Colorado, was appointed in 2006 by President George W. Bush. He was previously a deputy assistant attorney general at the Justice Department and is the youngest Supreme Court nominee in 25 years. President Donald J. Trump nominated him to fill the vacancy on the high court following the death of conservative Associate Justice Antonin Scalia.

The American Bar Association, which is a known leftwing association, has given him the highest rating available and, as he touted in his confirmation hearing, his opinion has been in “the majority 99% of the time.”

In July 2006, Judge Gorsuch was confirmed by the Senate unanimously by a voice vote, with the record including the vote of Minority Leader Chuck Schumer, D-N.Y., then-Sens. Barack Obama and Joe Biden.

Yet, Sen. Schumer, who is feeling enormous pressure from the hard left wing currently running the party, said on NBC’s “Meet the Press” that Gorsuch would not pass the false 60-vote threshold and claimed President Trump should get together with Democrats and Republicans to “try to come up with a mainstream nominee.”

While he is pressuring red state Senate Democrats to obstruct the nomination, the electoral pressure for some may be too great. And even if confirmation comes up shy of 60 votes, each senator that breaks from the leadership of the party makes it that much harder to take an politically untenable position.

Sen. Joe Manchin, D-W.Va., was first to announce he would break with party and vote to confirm Judge Gorsuch. The senator from West Virginia made the announcement on Twitter. Shortly after his announcement, Sen. Heidi Heitkamp, D-N.D., also took to Twitter to break with Sen. Schumer. Sen. Joe Donnelly, D-Ind., was the last to say he would vote to confirm.

The Senate Judiciary Committee is expected to vote Monday along party lines and the final vote is expected on Friday.