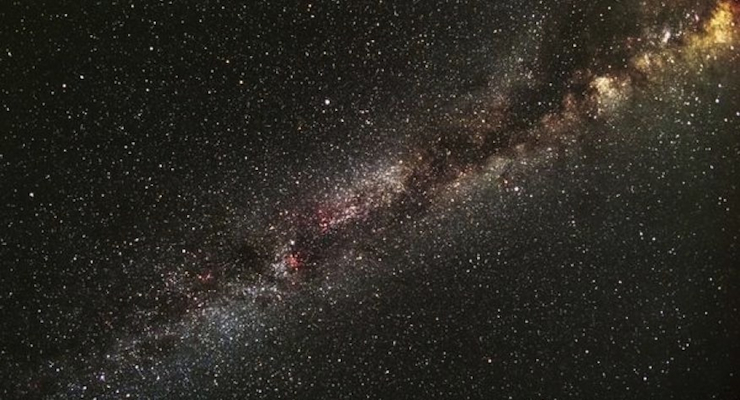 Image of the Milky Way that includes the Kepler field of view (Photo: Carter Roberts).

A citizen science program at Yale University discovered a distant star that scientists say may possibly deliver credible evidence that alien life exists in the Milky Way Galaxy. Planet Hunters, taking data from the Kepler Space Telescope, found star KIC 8462852 as they were searching for signs of a dimming of light that occurs when orbiting exoplanets cross in front of parent stars.

KIC 8462852 is 1,481 light years away from Earth. A light year measures the astronomical distance that light travels in one year and is equivalent to 5.8 trillion miles.

Yale University astronomer Tabetha Boyajian, who wrote a paper on the star that appeared in the Monthly Notes of the Royals Astronomical Society, told the New Scientist that she was drawn to the star’s unusual light-bending behavior. Jason Wright, a Penn State University astronomer who has done research on the search for extraterrestrial intelligence, was impressed with the data Boyajian sent him.

“That was when I got interested in in it because the light curve is so bizarre,” Wright said. “It gets dimmer for days at a time. We haven’t seen anything quite like this.”

According to Wright, this is behavior that has been seen in young stars, but KIC 8462852 is old. Flickering in young stars could be caused by something landing on the star or a disc of material passing in front of it like the “recent discovery of a giant planet with enormous rings and it very slowly, over the course of a month or two, passed in front of its star and the star kept flickering, blinking out as the rings went by.”

“This seems to be old. It doesn’t show any signs of youth. It is nowhere near a place that stars form,” Wright said. “It’s moving too quickly to be a young star. It doesn’t look young. So, that gets rid of all the natural, obvious things. Then, you start reaching for contrived ways to do this to an old star.”

Yet, in her paper, Boyajian ruled out several scenarios that could account for the odd flickering, including instrument malfunction and came up with only one other scenario involving a large number of comets pulled inwards by another passing star.

Wright told Fox News Science that this is a “nice but contrived explanation” and not something that would have been easy for planet hunters to have noticed.

“We just happened to be looking when a giant swarm of enormous comets is passing by,” he said. “Maybe. Something weird is going. This may be the best explanation I’ve heard so far.”

However, another possibility is that the flickering is a sign of alien life, or the result of a number of “megastructures,” which were built by space creatures that passed in front of the star. While it seems far fetched, it was actually first proposed in 2005 by astronomer Luke Arnold.

“If alien civilizations do build giant structures, planet-sized structures in space, sometimes they will pass in front of their star and it will look different from when a planet transits the star,” Wright said. “If Kepler surveyed 100,000 stars and one of those is surrounded by alien megastructures, Kepler will notice them. They won’t look like a planet. They will look very different.”

Wright added that it was “notable” that KIC 8462852 has these “very strange signatures that presumably are consistent with giant noncircular structures going in front of it,” though he admitted the the flickering of KIC 8462852 is “unlikely to be aliens.”

“But you have got to look,” he said. “It’s got us intrigued and it’s worth it for SETI (Search for Extraterrestrial Intelligence) to take a look because that is what SETI does. SETI is a moon shot, a long shot …You have to try and this is one of the best places to look.”

Meanwhile, Boyajian, Wright and Andrew Siemion, the Director of the SETI Research Center at the University of California Berkeley, are getting together to search for an anwer. They have proposed directing a massive radio dish at the star to see if it emits radio waves of the “sort that could only be emitted by artificial technology.”

“If you see radio emissions of the sort that we’ll look for with this antennae coming from that star, then that is case closed,” Wright said, comparing such a discovery to something out of the movie “Contact”. “There is no natural way to generate those. That is why they do it. It’s a slam dunk case for alien intelligence.”

Worth noting, many scientists are beginning to believe that alien life, or at least an ancient advanced civilization, perhaps does not even use electronics or other devices that would emit radio waves. This has been increasingly used as an explanation for why SETI has thus far failed in their mission to find alien life.

Experts NY Times Article on Jewish Temple "Based on Ignorance"