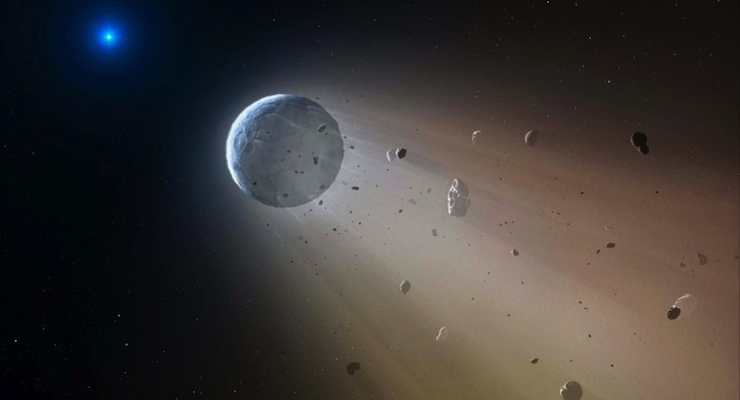 In this artist’s conception, a tiny rocky object vaporizes as it orbits a white dwarf star. Astronomers have detected the first planetary object transiting a white dwarf using data from the K2 mission. Slowly the object will disintegrate, leaving a dusting of metals on the surface of the star. (Photo: CfA/Mark A. Garlick)

CAPE CANAVERAL, Fla.–Just in time for the new “Star Wars” movie, NASA says a white dwarf star in the Constellation Virgo turned out to be a “death star.” Scientists announced Wednesday that NASA’s exoplanet-hunting Kepler spacecraft discovered a rocky object in a death spiral being vaporized by a distant star it was orbiting.

“We are for the first time witnessing a miniature ‘planet’ ripped apart by intense gravity, being vaporized by starlight and raining rocky material onto its star,” said Andrew Vanderburg, graduate student from the Harvard-Smithsonian Center for Astrophysics in Cambridge, Mass., and lead author of the paper published in Nature.

This dead, dense star remnant is called a white dwarf. As stars like our sun age, they expand in size during their evolution into red giants. Then, they gradually lose about half their mass, shrinking down to 1/100th of their original size to roughly the size of Planet Earth. The data show the object in an orbit 520,000 miles from the white dwarf, which is roughly distance from the Earth to the moon, and back. Vanderburg and his team also found several additional chunks of orbiting material.

“The eureka moment of discovery came on the last night of observation with a sudden realization of what was going around the white dwarf,” Vanderburg said. “The shape and changing depth of the transit were undeniable signatures.”

The fictional Death Star in the cultural and iconic “Star Wars” series was the Empire’s enormous space weapon that destroyed an entire planet as punishment for disobedience to the centralized galactic government.

“For the last decade we’ve suspected that white dwarf stars were feeding on the remains of rocky objects, and this result may be the smoking gun we’re looking for,” said Fergal Mullally, staff scientist of K2 at SETI and NASA’s Ames Research Center in Moffett Field, California. “However, there’s still a lot more work to be done figuring out the history of this system.”

Here’s how it all unfolded:

During its first observing campaign from May 30, 2014 to Aug. 21, 2014, K2 trained its gaze on a patch of sky in the constellation Virgo, measuring the minuscule change in brightness of the distant white dwarf. When an object transits or passes in front of a star from the vantage point of the space telescope, a dip in starlight is recorded. The periodic dimming of starlight indicates the presence of an object in orbit about the star.

Ames manages the Kepler and repurposed K2 missions for NASA’s Science Mission Directorate, while NASA’s Jet Propulsion Laboratory in Pasadena, Calif., managed Kepler mission development. Ball Aerospace & Technologies Corporation operates the flight system with support from the Laboratory for Atmospheric and Space Physics at the University of Colorado in Boulder.

“This discovery highlights the power and serendipitous nature of K2. The science community has full access to K2 observations and is using these data to make a wide range of unique discoveries across the full range of astrophysics phenomena,” said Steve Howell, K2 project scientist at Ames.

The findings are being published this week in the journal Nature.

It's the Great Asteroid Charlie Brown: 2015 TB145 to Pass Earth on Halloween