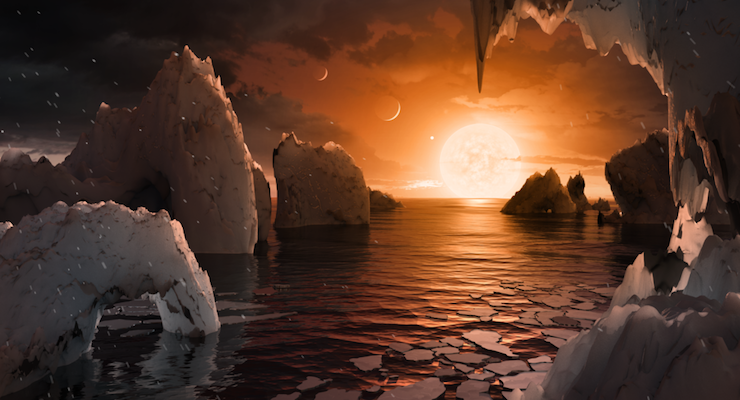 NASA announced the discovery of 7 Earth-like planets orbiting a star some 40 light years away, including 3 planets in the so-called “Goldilocks zone.” The zone refers to a “not too hot, not too cold” distance planets orbit from their star making them potentially habitable environments for life.

This exoplanet system known as TRAPPIST-1–named for The Transiting Planets and Planetesimals Small Telescope (TRAPPIST) in Chile–is located in the constellation Aquarius.

“This discovery could be a significant piece in the puzzle of finding habitable environments, places that are conducive to life,” said Thomas Zurbuchen, associate administrator of the agency’s Science Mission Directorate in Washington. “Answering the question ‘are we alone’ is a top science priority and finding so many planets like these for the first time in the habitable zone is a remarkable step forward toward that goal.”

Based on their densities, all of the TRAPPIST-1 planets are likely to be rocky, but further study is needed to determine whether any of the newly discovered celestial bodies have water on them.

Though this latest discovery was made using the Spitzer Space Telescope, thus far the most productive instruments in the search for other planets has been the Kepler Space Telescope. It has located a total 2,331 confirmed exoplanets with a technique called the transit method, which observes a planet star’s light dimming when it passes in front of it. NASA says this method accounts for roughly 74% of known exoplanets that have been discovered.

“The seven wonders of TRAPPIST-1 are the first Earth-size planets that have been found orbiting this kind of star,” said Michael Gillon, lead author of the paper and the principal investigator of the TRAPPIST exoplanet survey at the University of Liege, Belgium. “It is also the best target yet for studying the atmospheres of potentially habitable, Earth-size worlds.”

NASA announced last August they had discovered a planet orbiting the known closest star to Earth to date–Proxima b. It is a planet slightly larger than our own and located four light years away. That’s close by cosmic measure but still very far away, as 1 light year–or, the distance light can travel in one Earth year–equals almost 6 trillion miles.

“This is the most exciting result I have seen in the 14 years of Spitzer operations,” said Sean Carey, manager of NASA’s Spitzer Science Center at Caltech/IPAC in Pasadena, California. “Spitzer will follow up in the fall to further refine our understanding of these planets so that the James Webb Space Telescope can follow up. More observations of the system are sure to reveal more secrets.”