HomeNewsAtmosphere Detected Around Earth-Like Planet for First Time Ever

Atmosphere Detected Around Earth-Like Planet for First Time Ever 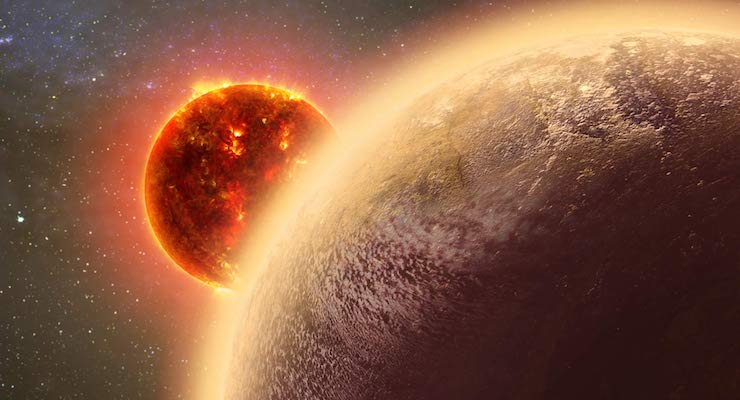 An artist’s rendition of GJ 1132b as it circles a red dwarf star. (Image credit: Dana Berry)

A study published in the Astronomical Journal claims scientists for the first time ever have detected an atmosphere around an Earth-like planet known as GJ 1132b. The “super-Earth” terrestrial planet is 1.4-times the size of our planet, located 39 light years away and the latest research indicates it is cloaked in a thick layer of gases.

Scientists believe the gases are either water or methane, or a mixture of both.

While the discovering and study of an atmosphere is an important step in the search for life beyond our Solar System, it is highly unlikely that this world is habitable. GJ 1132b, which was discovered in 2015, has a surface temperature of 370C.

“To my knowledge the hottest temperature that life has been able to survive on Earth is 120C and that’s far cooler than this planet,” Dr John Southworth, the lead researcher from Keele University, said.

GJ 1132b is located in the Vela constellation in the southern hemisphere and, while it is a similar size to Earth, the star it orbits is much smaller, cooler and dimmer star than our Sun–a dwarf star. Different molecules in a planet’s atmosphere absorb light in different ways, allowing scientists to identify their chemical signatures as it orbits its star.

“It makes the star look a little bit fainter – and it’s actually a very good way of finding transiting planets – it’s how this one was found,” Dr Southworth added. “One possibility is that it is a ‘water world’ with an atmosphere of hot steam,” said Dr Southworth.

Orbiting so close to its host star, the Earth-like GJ 1132b is bombarded with UV light, which breaks apart water molecules into hydrogen and oxygen that can be lost into space. However, oxygen lingers behind as the lighter hydrogen escapes more easily.

“This is a nice proof of concept,” said Marek Kukula, the public astronomer at the Royal Observatory Greenwich. “If the technology can detect an atmosphere today, then it bodes well for being able to detect and study the atmospheres of even more Earth-like planets in the not-too-distant future.”

Researchers are excited regardless of whether the world is home to other life-forms because the discovery of an atmosphere proves long-held theory.

“What we have shown is that planets around low mass stars can have atmospheres and because there are so many of those in the Universe, it makes it that much more likely that one might have life.”