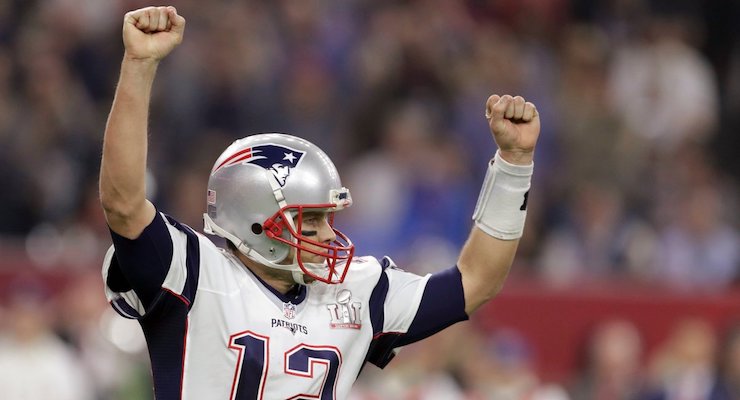 The New England Patriots defeated the heavily favored Atlanta Falcons 34 to 28 in the first Super Bowl ever to go into overtime. With the win, Tom Brady becomes the first quarterback to win five Super Bowl championships and, with being named Most Valuable Player (MVP), he now surpassed Joe Montana for the Super Bowl record.

The Patriots were down 28 to 3 going into halftime, making their comeback the biggest ever in Super Bowl history. With the win, Tom Brady becomes the first quarterback to win five Super Bowl championships and, at 39, the second oldest at his position to win the NFL’s biggest prize.

“We all brought each other back,” a visibly emotional Brady said as the confetti fell down on the field inside NRG Stadium. “We never felt out of it. It was a tough battle.”

Nobody has more Super Bowl MVP awards than Tom Brady.

“They (Atlanta) have a great team, I give them a lot of credit. We just made a few more plays than them,” he added.

Brady also set several other records, including the most passing yards (466) ever in a Super Bowl. His previous largest comeback was from a deficit of 24. But tonight he rallied from 25 down in overtime to take the game. He is now tied with Charles Haley for the most Super Bowl wins of any NFL player.

Together with Bill Belichick, Tom Brady took a lot of criticism for having friendships with and supporting President Donald J. Trump. In an interview with Bill O’Reilly, President Trump said “Tom is my friend” and called Brady “a winner.” When pressed to make a prediction, he called it for the Patriots by 8.