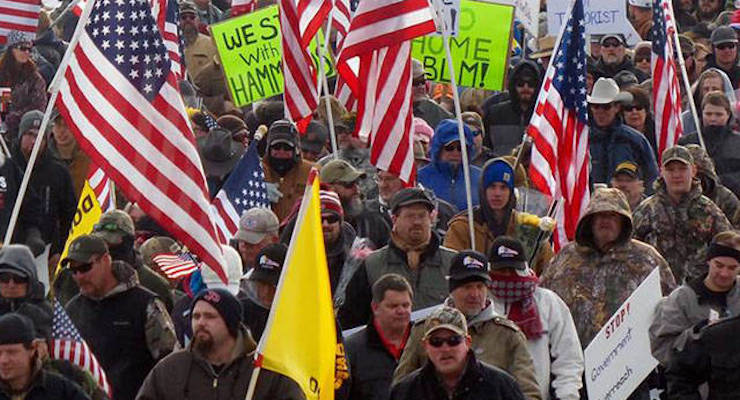 Protestors gather in support of the Hammond family in Oregon.

When I first read about armed protesters taking over a federal building in Oregon, I thought some nutjobs were about to cause some real trouble. Was this a right-wing version of the loons from the Occupy Wall Street movement, only with guns?

Then I learned that the “federal building” was nothing more than a remote and unoccupied structure in a wildlife refuge, making this story a molehill rather than a mountain.

Now I’m learning that the ostensible nutjobs have some very genuine grievances, specifically about the way the Hammond family has been viciously mistreated by the federal government.

David French, an attorney and veteran, has a column in National Review that looks at why folks in Oregon are upset with Washington.

…what if they’re right? What if the government viciously and unjustly prosecuted a rancher family so as to drive them from their land? Then protest, including civil disobedience, would be not just understandable but moral, and maybe even necessary. …Read the court documents in the case that triggered the protest… What emerges is a picture of a federal agency that will use any means necessary, including abusing federal anti-terrorism statutes, to increase government landholdings.

Here’s his summary of the situation.

The story…begins…with the creation and expansion of the Malheur National Wildlife Refuge, a tract of federal land…The federal government has since expanded…in part by buying adjacent private land. Protesters allege that when private landowners refused to sell, the federal government got aggressive, diverting water during the 1980s into the “rising Malheur lakes.” Eventually, the lakes flooded “homes, corrals, barns, and graze-land.” Ranchers who were “broke and destroyed” then “begged” the government to buy their “useless ranches.” …the Hammonds were among the few private landowners who remained adjacent to the Refuge. …the government then began a campaign of harassment designed to force the family to sell its land, a beginning with barricaded roads and arbitrarily revoked grazing permits and culminating in an absurd anti-terrorism prosecution based largely on two “arsons” that began on private land but spread to the Refuge.

Arson sounds serious, but French explains that it’s not what city folks assume when they hear that word.

While “arsons” might sound suspicious to urban ears, anyone familiar with land management…knows that land must sometime be burned to stop the spread of invasive species and prevent or fight destructive wildfires. Indeed, the federal government frequently starts its own fires.

Here’s the part that’s most disturbing. David explains how the federal government used a sledgehammer to go after a fly.

In 2010 — almost nine years after the 2001 burn — the government filed a 19-count indictment against the Hammonds that included charges under the Federal Anti-terrorism and Effective Death Penalty Act…the Hammonds and the prosecution reached a plea agreement in which the Hammonds agreed to waive their appeal rights and accept the jury’s verdict. It was their understanding that the plea agreement would end the case. At sentencing, the trial court refused to apply the mandatory-minimum sentence, holding that five years in prison would be “grossly disproportionate to the severity of the offenses”… The federal government, however, was not content to let the matter rest. Despite the absence of any meaningful damage to federal land, the U.S. Attorney appealed the trial judge’s sentencing decision… the Ninth Circuit Court of Appeals…ruled against… The Hammonds were ordered back to prison.

And here’s his bottom line.

There’s a clear argument that the government engaged in an overzealous, vindictive prosecution here. By no stretch of the imagination were the Hammonds terrorists, yet they were prosecuted under an anti-terrorism statute. …To the outside observer, it appears the government has attempted to crush private homeowners and destroy their livelihood in a quest for even more land. If that’s the case, civil disobedience is a valuable course of action. …I sympathize with the ranchers’ fury, and I’m moved by the Hammonds’ plight. …now they’re off to prison once again — not because they had to go or because they harmed any other person but because the federal government has pursued them like a pack of wolves.

I would have said a pack of hyenas, but that’s a rhetorical difference.

What matters is that the federal government has behaved reprehensibly.

…armed occupation of federal buildings is inexcusable, but so are federal land-management abuses and prosecutorial overreach. …The drama is bringing attention to legitimate grievances, especially the appalling federal treatment of the Hammond family. …The government has…been on a voracious land-and-water grab, coercing the area’s once-thriving ranchers to sell. The feds have revoked dozens of grazing permits and raised the price of the few it issues. It has mismanaged the area’s water, allowing ranchlands to flood. It has harassed landowners with regulatory actions that raise the cost of ranching, then has bought out private landowners to more than double the refuge’s size. …Many in rural Oregon view this as a government vendetta. …The ideology of “national” land has become the club to punish private landowners who are the best source of economic stability and conservation. The Bundy occupation of federal land can’t be tolerated, but the growing Western opposition to government harassment of private landowners ought to be a source of political concern.

By the way, this doesn’t mean that the protesters automatically are right about being victimized. Yes, in some cases, federal bureaucrats are grossly mistreating folks. But in other cases, ranchers may be fleecing taxpayers because of implicit subsidies for things like grazing rights on federal land and water rights.

Moreover, according to CNN, the Bundy family (which is leading the sit-in at the wildlife refuge) has no problem mooching off taxpayers.

Ammon Bundy, a leader of the armed protesters who took over a federal building in Oregon, and his family are…not opposed to government and said that taking a six-figure loan from the Small Business Administration doesn’t conflict with his political philosophy.

But even if there are no pure good guys in this story, there is a pure solution.

And that’s to shrink the federal government’s ownership of land. As you can see from this Wikipedia map, Uncle Sam owns most of the land in America’s western states. 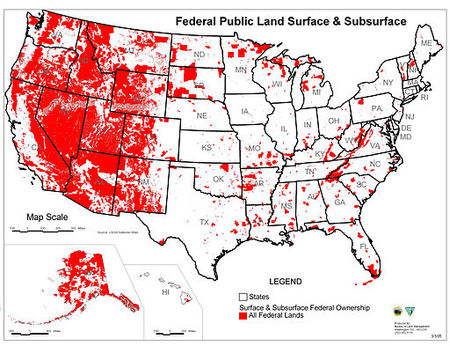 This makes no sense. It means potentially valuable land is locked up, which undermines the economy’s growth and efficiency.

Why not auction up a huge portion of that land so it’s in private hands where there will be proper incentives for wise stewardship (including conservation)?

And if politicians decide that some of the land should be set aside for parks, that should be the result of open and honest deliberation. Just as decisions to obtain private land (for genuine public purposes, not Kelo-style cronyism) should be legitimate and include proper compensation.

P.S. This story reminds me that I need to create a special page for “Victims of Government Thuggery” to augment the Bureaucrat Hall of Fame and Moocher Hall of Fame.

The Hammonds would be charter members.