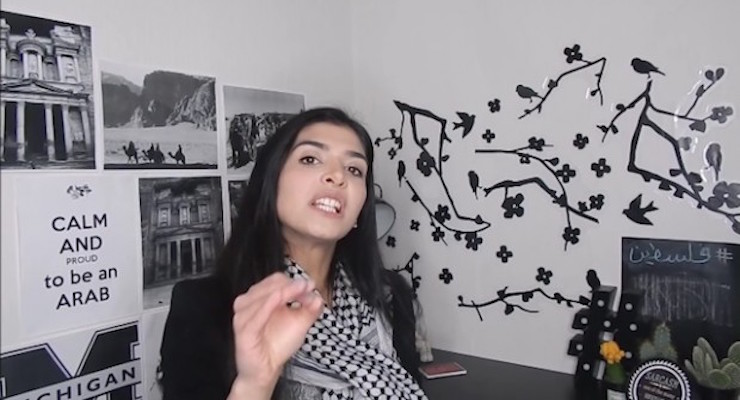 A Michigan Muslim woman posted a YouTube video supporting Palestinian stabbing attacks against Jews and blasted Muslims who try to argue that stabbing is “haram,” or forbidden, under Islamic law. The video, which was translated by the Middle East Media Research Institute, was posted on YouTube last week by Lina Allan, who MEMRI described as “a Palestinian-Jordanian activist who lives in Michigan.”

Interestingly, her Twitter profile describes herself as “an optimistic person” and lists Michigan, which has a large (and often problematic) Muslim population, as her location. MEMRI previously reported that in 2012, Allan told Jordan’s Roya TV that she represented the State Department’s U.S.-Middle East Partnership Initiative (MEPI) in the Jameed Festival in Jordan, a food and culture event honoring rural women.

One of the more informative yet entertaining statements she made was when she slammed Muslims who claim Islam does not allow stabbing attacks. Allan said they are trying to be “muftis” and told them to “go back to watching Turkish soap operas.” She made the video statement with a photo behind her that read, “Calm and Proud to Be an Arab.”

“Nobody can feel the suffering of the Palestinian people but the Palestinians living in Palestine,” Allan said. “I wish that you would stop interfering. Spare us your views, and go back to watching Turkish soap operas. It would be better if you didn’t talk about something you don’t understand.”