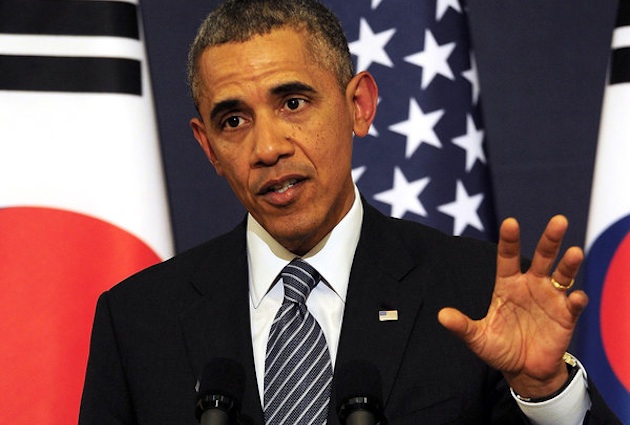 SEOUL, SOUTH KOREA: US President Barack Obama speaks during a joint press conference with South Korean president Park Geun-Hye at the presidential Bule House on April 25, 2014 in Seoul, South Korea. The U.S. President is on an Asian tour where he is due to visit Japan, South Korea, Malaysia and Philippines. (Photo by Song Kyung-Seok – Pool/Getty Images)

White House officials said Saturday that the G-7 leadership have agreed on new Russian sanctions after confirming a Russian aircraft had entered Ukrainian airspace Friday. Ben Rhodes, the administration’s deputy national security adviser for strategic communications, told reporters on Air Force One that the G-7 leaders have agreed on coordinated sanctions, but not identical per country per se.

In a statement released Saturday morning, G-7 leadership said Russia has broken some of the provisions of the accord agreed upon earlier this month in Geneva.

“We reiterate our strong condemnation of Russia’s illegal attempt to annex Crimea and Sevastopol, which we do not recognize. We will now follow through on the full legal and practical consequences of this illegal annexation, including but not limited to the economic, trade and financial areas,” the statement read.

“We have now agreed that we will move swiftly to impose additional sanctions on Russia. Given the urgency of securing the opportunity for a successful and peaceful democratic vote next month in Ukraine’s presidential elections, we have committed to act urgently to intensify targeted sanctions and measures to increase the costs of Russia’s actions,” G-7 leaders said in the statement.

Sanctions reportedly could be handed down as early as Monday, though People’s Pundit Daily could not confirm the claim made by the Washington Post.

The latest development comes almost immediately after the Obama administration drew harsh criticism from lawmakers for a tweet late Thursday by State Department spokeswoman Jen Psaki. In what many are referring to as “Hashtag Diplomacy,” the very liberal Psaki took to Twitter to show public support for Ukraine and to negotiate with Russia after the annexation of Crimea.

The world stands #UnitedforUkraine. Let’s hope that the #Kremlin & @mfa_russia will live by the promise of hashtag

It was widely denounced as inappropriate and amateurish, symbolic of a seemingly flailing administration who has been seen as lost on a larger-than-them world stage time and again. “Note to the State Department: ‘The promise of a hashtag’ isn’t going to make [Russian President] Putin pull out of Ukraine,” Texas GOP Sen. Ted Cruz tweeted Saturday.

“The thought that somebody would come at him with 160 characters is absolutely terrifying to Vladimir Putin,” Huckabee said Saturday. Huckabee is currently leading by a small .5-point margin in the PPD average of polls for the 2016 Republican nomination.

Yet criticism over Obama’s obviously weak foreign policy is by no means limited only to conservatives and Republicans.

“Let’s face it Obama whether deservedly or not does have a — I’ll say it crudely — but a manhood problem in the Middle East,” the liberal New York Times writer David Brooks said on NBC’s “Meet the Press.”

“Is he tough enough to stand up to somebody like [Syrian President] Bashar Assad, somebody like Putin — and I think a lot of the rap is unfair but certainly in the Middle East there is an assumption it’s not tough enough.”