HomeNewsWorldNATO Has ‘Great Concern’ Of Russian Military Invasion Of Ukraine

NATO Has ‘Great Concern’ Of Russian Military Invasion Of Ukraine 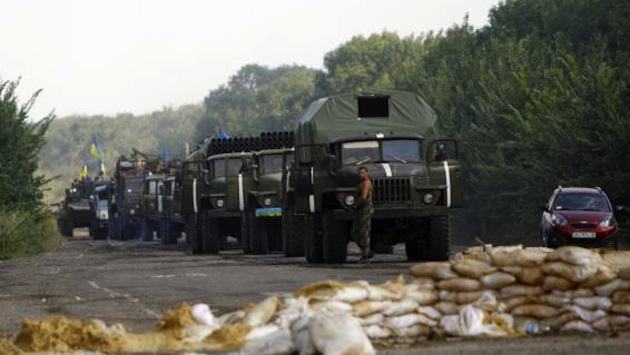 A convoy of military armoured vehicles is seen near a checkpoint on a road in Donetsk region August 6, 2014.
(Photo: REUTERS/VALENTYN OGIRENKO)

NATO officials say Russia had massed around 20,000 combat-ready troops on Ukraine’s eastern border and there is concern the Kremlin will use the pretext of a humanitarian mission to invade. It was the most serious warning to date from the Western alliance that the Russian military could invade its western neighbor.

The rebel Russian separatists have been losing pivots battles as of late, as Ukrainian government troops seek to take back Donetsk. Russia announced military exercises this week near the border after the Kremlin spent weeks lobbing artillery from Russian territory into Ukraine in an effort to reverse Ukraine’s momentum in the war.

“We’re not going to guess what’s on Russia’s mind, but we can see what Russia is doing on the ground – and that is of great concern. Russia has amassed around 20,000 combat-ready troops on Ukraine’s eastern border,” NATO spokeswoman Oana Lungescu said in an email.

Moscow could use “the pretext of a humanitarian or peace-keeping mission as an excuse to send troops into Eastern Ukraine”, she said. A NATO military officer, speaking on condition of anonymity, told Reuters that Russia’s build-up at the border included tanks, infantry, artillery, air defense systems, logistics troops, special forces, and aircraft.

Russia, as usual, is attempting to dismiss the the concern, and a Russian defense ministry spokesman said the world has “been hearing this for three months already.”

Yet, Russian President Vladimir Putin has promised he will use military force to supposedly protect Russian-speaking “compatriots” across regions that made up the former Soviet Union. He classified southern and eastern Ukraine “New Russia”, which consequently, is the same name the rebels use.

Polish Prime Minister Donald Tusk said Wednesday that the very real threat of a Russian invasion of Ukraine has increased over the last couple of days.

Meanwhile, the Kremlin announced that Moscow will ban all imports of food from the United States and all fruit and vegetables from Europe. The move is a stronger-than-expected response to Western sanctions imposed over its support for rebels in Ukraine.

A spokesman for Russia’s food safety watchdog VPSS, Alexei Alexeenko, previously said all European fruit and vegetables and all produce from the U.S. were included in the ban on a direct order from Putin, who wants “to punish countries that imposed sanctions on Russia.”

Save for U.K. Prime Minister David Cameron, the response from Europe’s great powers has been weak at best, and self-serving at worst. Germany and France rely heavily upon Russia for energy needs and have repeatedly dragged their feet. The U.S., on the other hand, had announced only specific targeted sanctions until Russian-backed separatists shot down Malaysia Airlines Flight MH17, which killed nearly 300 innocent civilians.