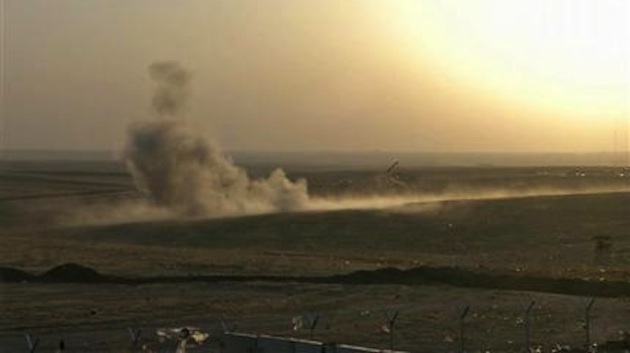 This image made from AP video shows smoke rising from airstrikes targeting Islamic State militants near the Khazer checkpoint outside of the city of Irbil in northern Iraq, Friday, Aug. 8, 2014. The Iraqi Air Force has been carrying out strikes against the militants, and for the first time on Friday, U.S. war planes have directly targeted the extremist Islamic State group, which controls large areas of Syria and Iraq.(AP Photo via AP video)

DEVELOPING – Iraqi pilots who have defected and joined the Islamic State are training Islamic terrorist pilots to fly in three captured fighter jets, MIG 21 or MIG 23, in what is the first time the terror army has taken to the air.

Rami Abdulrahman, who runs the Britain-based Syrian Observatory for Human Rights, said the group is flying planes over al-Jarrrah, a military airport east of Aleppo, Syria.

“They have trainers, Iraqi officers who were pilots before for (former Iraqi president) Saddam Hussein,”Abdulrahman told The Jerusalem Post.

It was not clear whether the jets were equipped with weaponry or whether the pilots could fly longer distances in the planes, which witnesses said appeared to be MiG 21 or MiG 23 models captured from the Syrian military.