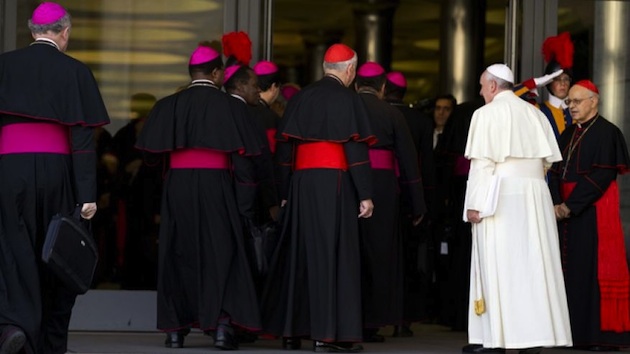 Oct. 18, 2014: Pope Francis, right, arrives with bishops and cardinals to attend an afternoon session of a two-week synod on family issues at the Vatican. (Photo: AP)

Gay rights groups are up-in-arms after Catholic Church bishops decided against softening their stance on same-sex marriage at the end of a two-week synod called by Pope Francis. The meeting was geared toward exploring a more merciful approach to ministering to Catholics on various family issues.

“Unfortunately, today, doctrine won out over pastoral need,”the Boston-based DignityUSA organization said in a statement late Saturday. “It is disappointing that those who recognized the need for a more inclusive Church were defeated.”

The drafted measure that failed to win two-thirds support was essentially a watered-down version on ministering to homosexuals, which excluded language from a prior document drafted earlier in the week. Rather than considering gays as those who have gifts to offer to the church, the revised language instead referred to homosexuality as one of the challenges Catholic families have to confront.

It reads “people with homosexual tendencies must be welcomed with respect and delicacy,” but reaffirmed church doctrine that holds marriage is a God-approved union only between one man and one woman. The paragraph failed to reach the two-thirds majority needed to pass.

New Ways Ministry, another U.S.-based pro-gay Catholic group, said it was “very disappointing” that the final language had excluded a softer stance on gay marriage. However, it also said the Catholic Church’s “openness to discussion provides hope for further development down the road, particularly at next year’s synod, where the makeup of the participants will be larger and more diverse, including many more pastorally-oriented bishops.”

The synod’s focus was not gay marriage per se, in fact, two other paragraphs dealt with whether divorced and civilly remarried Catholics can receive Communion. The two issues have long been in contention among bishops and, they too, also failed to pass.

Pope Francis reportedly insisted the paragraphs that failed to pass be published with the voting tally, which will serve as the base document for future debate leading up to another meeting of bishops next October that will produce a final report to be sent to Francis.

“Personally, I would have been very worried and saddened if there hadn’t been these animated discussions or if everyone had been in agreement or silent in a false and acquiescent peace,” Francis told those in attendance after the vote.

The draft was written by Monsignor Bruno Forte, a theologian and Francis appointee known for pushing the limits on what is considered acceptable pastoral duties, and ministering to people in “irregular” unions. The draft was supposed to have been a synopsis of the bishops’ interventions, but many claim that it reflected a small minority view.

Conservatives criticized the draft and claimed it was an attempt to restate church doctrine, which officially says that gay sex is “intrinsically disordered,” but that gays themselves are to be respected.

Cardinal Wilfrid Fox Napier of South Africa, who assisted in drafting the revised document, told Vatican Radio the final document found a “common vision” that was lacking in the first draft, but also had harsher words.

He said a key sticking point was a concern that the words in the first draft were “presenting homosexual unions as if they were a very positive thing.” It also suggested that divorced and remarried Catholics should be able to receive Communion without an annulment, which is also not the consensus.

“And that made people very angry,” he said.