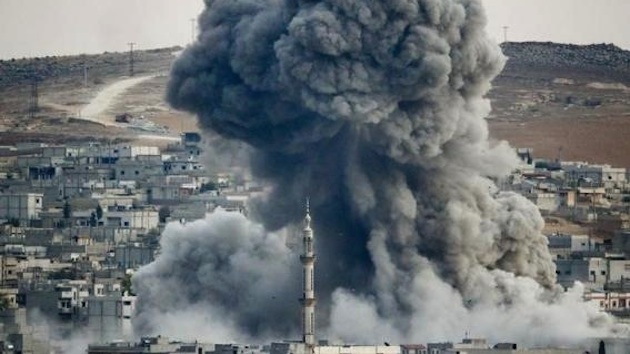 Smoke rises over Syrian town of Kobani after an airstrike, as seen from the Mursitpinar border crossing on the Turkish-Syrian border in the southeastern town of Suruc in Sanliurfa province, October. (Photo: Reuters/Kai Pfaffenbach)

In defiance of Turkey, U.S. military officials confirmed late Sunday that it had dropped weapons, ammunition, and medical supplies to the Kurdish defenders of the Syrian border town of Kobani. The airdrops, which were staunchly opposed by Turkey, a U.S. ally and NATO member, were part of an increasing effort to aid the Kurds who have been locked in a fierce battle to defend the town against the Islamic State.

“We wanted to make sure we could resupply them so they could continue that effort,” Pentagon spokesman Rear Admiral John Kirby said Monday morning.

The airdrops, indeed, have the Turkish government in protest. Turkey officials say they opposed any U.S. plan to arm the Kurdish fighters in Syria, whom they align with the Turkish Kurd group known as the PKK. The Kurdish group has waged a 30-year insurgency inside of Turkey and, in fact, the PKK is designated a terror group by both the U.S. and NATO.

White House officials say President Obama spoke by phone with Turkish President Recep Tayyip Erdogan on Saturday. The president reportedly discussed the plan to arm the Kurdish defenders, but officials would not say how Erdogan responded. The Turkish media on Sunday quoted Erdogan as saying Ankara would never arm the YPG, which they view as the political wing of the PYD.

“There has been talk of arming the PYD to establish a front here against Islamic State. For us, the PYD is the same as the PKK, it’s a terrorist organization,” the report quoted him saying.

While U.S. Central Command (CentCom) confirmed it had launched 11 airstrikes overnight in the area, they have conducted more than 135 airstrikes against Islamic State forces in Kobani.

“Combined with continued resistance to ISIL on the ground, indications are that these strikes have slowed ISIL advances into the city, killed hundreds of their fighters and destroyed or damaged scores of pieces of ISIL combat equipment and fighting positions,” CentCom said in a written statement.

According to sources close to the British-based Syrian Observatory for Human Rights, 70 Islamic State fighters had been killed in the past two days. The figures are reportedly from the hospital in the nearby town of Tel Abyab, where Islamic State bodies are taken when wounded or killed in action, but they are unconfirmed.

Critics question why the administration is now pushing so hard to defend the town, even risking an already strained relationship with a member of the NATO alliance to help defend it. Erdogan was furious recently after Vice President Joe Biden said he admitted that Turkey and other allies armed Islamic extremists in an effort to overthrow Syrian President Bashir Assad. He denied he ever making the remarks and said Biden would become “history to me” if the administration didn’t retract the allegations with an apology.

“What changed is that ISIL wants that town,” Rear Admiral Kirby said. “It matters to us because it matters to them. They desperately want that town.”

The more resources they pour in to the town, the more targets they represent,” he added. “We’d be foolish not to take advantage of that.”

What impact the arms and assistance with have on the ultimate outcome of the battle is unclear. Many fear the administration waited too long to arm the Kurds, which were in a far better position to defend the city weeks ago. Now, the ISIS advance will be more difficult to stop and their gains in the city not easily reversed.

“We have dropped a bomb here and a missile there, but it has been a photo-op foreign policy,” Sen. Ted Cruz of Texas said on CNN’s “State of the Union” on Sunday. “Obama’s approach to ISIS has been like his approach to so many other issues — fundamentally un-serious.”

Cruz went on to criticize the time it took for the president to make the decision to arm the Kurds, which has no doubt resulted in higher death tolls and harder future missions. According to the Observatory for Human Rights, ISIS fired 44 mortars at Kurdish-controlled parts of the town on Saturday and some of the shells fell inside nearby Turkey.

Overnight, the fierce fighting continued as ISIS fighter hammered the Kurds with mortars and conducted a string of car bombings within the city.