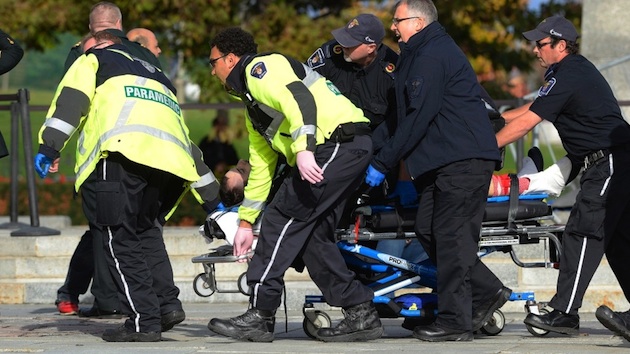 Canadian authorities confirmed late Wednesday they’ve identified the shooter in an apparent terror attack on Parliament Hill in Ottawa as Michael Joseph Hall, 32, also known as Michael Zehaf-Bibeau. The shooting, which left a soldier dead and put the nation’s capital on lockdown, came just two days after another terror attack in Quebec.

Two Canadian soldiers were run over in Quebec on Monday by a jihadist, leaving one of them fatally injured. Now, one U.S. intel official told PPD that the attacks came as no surprise, and were described as “an unfortunate expectation” due to alarming amounts of “chatter” between homegrown Islamic radicals and overseas jihadist groups. Further, U.S. officials worry the latest Canadian terror attacks are the just tip of the iceberg, the product of an organized effort to target members of the military and law enforcement agencies in nations that belong to the coalition fighting ISIS in Iraq and Syria.

According to one official who spoke on the condition of anonymity, both domestic and foreign Islamic radicals have been planning attacks of this nature for months, and a number of known-jihadists have simply vanished.

U.S. and Canadian intel officials are looking for Canadian native Amer el-Maati, a member of al-Qaida who trained in Afghanistan and Pakistan, and another Canadian-born jihadist, Faker Ben Abdelaziz Boussora. The latter also has ties to al-Qaida, was trained in Afghanistan, and is suspected of playing a part in a thwarted “major terrorist plot” along the U.S.-Canadian border earlier this year.

Speaking of borders, the official also claimed U.S. intel agencies are investigating whether there is a connection between Wednesday’s terror attack and the attack Monday, as well as whether individuals involved may have had any connection to other recent events, which were previously thought to be unrelated.

Afghan soldiers Maj. Jan Mohammad Arash, 48, Capt. Mohammad Nasir Askarzada, 18, and Capt. Noorullah Aminyar, 20, were caught attempting to cross the Canadian border near Niagara Falls in late September. The men arrived at Camp Edwards on Sept. 11 — of all days — for a joint training exercise, but disappeared after they fled from a Cape Cod military base. The Pentagon told PPD after they were apprehended that they did not believe the three men posed a threat to U.S. security.

But according to intel officials, the truth is two-fold. The Pentagon and State Department vetting processes are deeply flawed and, in these instances, the sensitive politics of U.S.-Afghan relations took precedent over U.S.-Canadian national security interests. The practice of targeting members of the military with similar jihadi tactics and motivations has been a serious problem in Afghanistan. What are known as “green on blue” attacks accounted for 1 in 7 of all NATO deaths in 2014. Officials now fear Islamic radicals may be importing these brazen, broad-daylight attacks.

“We’re not sure what they [missing Afghan soldiers] were up to or if they or others were plotting similar attacks,” the official said. “Because members of the administration are concerned about growing distrust [between U.S. and Afghan officials], it wasn’t something we were pushed to pursue.”

The three Afghan soldiers who disappeared from the Cape Cod base weren’t alone. Mohd Naweed Samimi, 24, and Mohammad Yasin Ataye, 22, vanished from a DEA training program in Quantico, Virginia, at roughly the same time on Sept. 13. Authorities apprehended the two men in Buffalo, New York, approximately just 25 miles from the location authorities found the other three Afghan soldiers — Rainbow Bridge at Niagara Falls.

Little information is known about Michael Joseph Hall, or Zehaf-Bibeau, except that he was born in 1982 and was placed on a “watch list” in Canada and had his passport revoked. Other than the fact he was a recent convert to Islam and believed to be a native of Canada, officials are not saying for certain if a connection exists, though they admit the probability is high.

“Unfortunately, we are likely to see more of these attacks or attempts at them elsewhere,” the official said. “It is the radical ideology — not necessarily a person — that connects them all. But the information we have points to more than what we’ve seen today.”

Hall shot an honor guard at “point-blank” range at the National War Memorial before turning his attention to Parliament Hill, where the sergeant-at-arms fatally shot him.