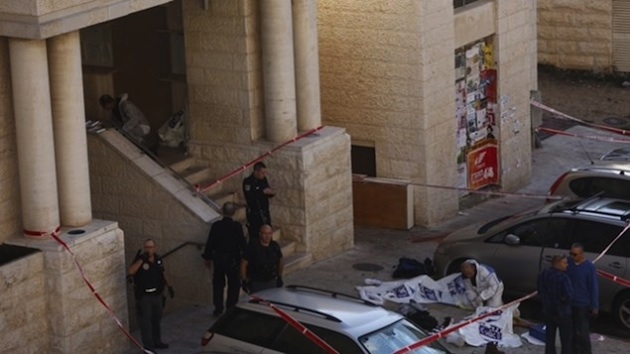 Israeli police outside the Kehilat Yaakov synagogue in Jerusalem after a terror attack there on November 18, 2014. The bodies of two terrorists covered with plastic are seen on the ground. (Photo: Yonatan Sindler/FLASH9)

DEVELOPING: Three Americans were among the four worshipers killed by Palestinians wielding meat cleavers and a gun in a Jerusalem synagogue Tuesday. Israeli Prime Minister Benjamin Netanyahu promised to “respond harshly” to the attack perpetrated by a pair of Islamic radicals shouting “Allahu Akbar.”

“We are viewing this as a terrorist attack,” said police spokesman Micky Rosenfeld. He also said eight other worshippers were injured, including two police officers, four of whom were reported in serious condition. He said police were searching the area for other suspects.

Officials have identified the Americans as Aryeh Kupinsky, Kalmen Levin and Moshe Twersky. All were killed along with a fourth person when the Islamic assailants, who Palestinian media identified as cousins Ghassan and Udai Abu Jamal, stormed the building and began attacking people.

Police identified one of the victims as Rabbi Moshe Twersky, who taught at a Jerusalem seminary. Twersky hailed from a Hassidic rabbinical dynasty and was a grandson of Joseph Soloveitchik, the renowned Boston rabbi who died in 1993.

Israeli police spokeswoman Luba Samri confirmed the attackers were cousins from east Jerusalem, an area of that has seen frequent clashes between Israeli police and Palestinian protesters in recent months. Samri also confirmed the assailants identities, and said both Ghassan and Oday Abu Jamal were from the Jabal Mukaber neighborhood.

Israeli Prime Minister Benjamin Netanyahu accused Palestinian President Mahmoud Abbas of inciting violence in Jerusalem. In order to say in power in early this year, Abbas formed an alliance with elected members of the Parliament that belong to Hamas’ political wing.

“We will respond with a heavy hand to the brutal murder of Jews who came to pray and were killed by lowly murderers,” Netanyahu said. U.S. Secretary of State John Kerry, who said he spoke to Netanyahu after the attack, denounced it as an “act of pure terror and senseless brutality and violence.”

While Kerry was blaming the attack on Palestinian calls for “days of rage” and urging Palestinian leaders to condemn the attack “in the most powerful terms,” Palestinian radio described the attackers as “martyrs.”

The Palestinian leader has denied the charges, as usual. Hamas, the terrorist group that runs the Gaza Strip, outwardly praised the attack that it said was retaliation for what it claimed was the murder of a Palestinian bus driver. However, the man was found hanged in his vehicle late Sunday and Israeli police — citing the official autopsy results — classified the man’s death as a suicide. Hamas and the man’s family, however, have not accepted those results.

“The presidency condemns the attack on Jewish worshippers in one of their places of prayer in West Jerusalem and condemns the killing of civilians no matter who is doing it,” Abbas said in a statement. But, then he also called for an end to Israeli “provocations” surrounding the sacred site where Palestinian gunman shot eight people in a religious seminary school back in 2008.

The Popular Front for the Liberation of Palestine claimed credit for the attack, which it called a “heroic operation,” and a Hamas spokesman actually called for more attacks in the future.

“Hamas calls for the continuation of revenge operations and stresses that the Israeli occupation bears responsibility for tension in Jerusalem,” Hamas spokesman Sami Abu Zuhri said.

Meanwhile, out outside the Abu Jamals’ home, clashes broke out between protestors and police. Residents threw stones at police who responded using riot dispersal weapons and 14 members of the Abu Jamal family were arrested.

Mohammed Zahaikeh, a social activist in Jabal Mukaber, said one of the relatives of the cousins, Jamal Abu Jamal, was released in a 2011 prisoner swap and re-arrested recently by Israeli police. He did not say why.

A rash of violence has broken out across Jerusalem with attacks by Palestinians against Israelis, most of which have involved cars being driven into pedestrians, increasing in recent weeks. At least six people had been killed in Jerusalem, the West Bank and Tel Aviv prior to Tuesday.

Tensions appeared to be subdued somewhat last week following a meeting between Netanyahu, Kerry and Jordan’s King Abdullah II that took place in Jordan. The goal of the meeting was to restore calm and ended with Israel and the Palestinians agreeing they would take steps to reduce tensions.

The Jerusalem holy site is referred to by Jews as the Temple Mount because of the Jewish temples that stood there in biblical times. It is the most sacred place in Judaism; Muslims refer to it as the Noble Sanctuary, and it is their third holiest site, after Mecca and Medina in Saudi Arabia.

The site is so holy that Jews have traditionally refrained from going there, instead praying at the adjacent Western Wall. Israel’s chief rabbis have urged people not to ascend to the area, but in recent years, a small but growing number of Jews, including ultranationalist lawmakers, have begun regularly visiting the site.